Bards and a Vanishing Breed of Russian

Years ago, on a bus in Israel, on the way from Jerusalem to the Golan Heights, a shy Russian Jewish boy named Igor (or maybe Ilya?) saw that I was bored with the music in my Discman (back in the days of CDs) and quietly slipped me one.  “Who is this,” I asked Igor/Ilya?”  “This guy named Timur Shaov.  He’s really good.”  And he was.

This weekend, I, along with my parents and Mr. B’s aunt and uncle,  got to see Shaov,  one of my favorite modern singers perform live. He sings in a type of style called, in Russian, bard song, which mainly means that he writes his own music, often on political or satirical themes, and accompanies his singing with simple guitar chords. I guess, in a way, he can be compared to Bob Dylan or Paul Simon, but it’s not a perfect comparison. 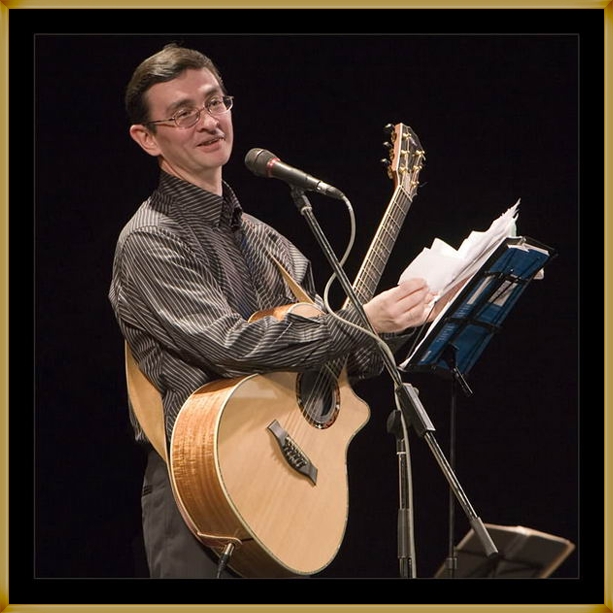 The most famous bard is Vladimir Vystosky who sung about the injustices of life in the Soviet Union with an enormous amount of cleverness, tenderness, rage, and humor.  He is my favorite musical artist of all time, and his lyrics are very hard to understand unless you understand the Soviet Union and Russian culture.  But even just listening to his voice is very powerful, and this song is one of his most-known. If you click-through, there’s a translation of lyrics into English:

Anyway, so Timur Shaov is awesome, amazing, funny, ridiculously smart, and phrases songs in a way that makes the writer in me very jealous. He is extremely good at making fun of Putin’s Russia in all its gory form but doesn’t come across as bitter and cynical like some people that have pretty blogs, but as wise and cheeky.   He has songs making fun of the money shortage in Russia in the early 1990s, when he was a doctor, by saying that patients paid their doctors in urine samples.

He’s made fun of how Russian husbands often dump the load of housework on their wives in a song where the kids are screaming, the soup is boiling, but the wife is locked in the bathroom reading porn, hoping to get three minutes to herself.  He’s made fun of Tajik drug smugglers, gaishniki (Russian traffic cops who fine you for bribes), how the desire to drink decreases with age, hangovers in general, men who yell at their husbands, and Medvedev.  It’s hard to explain how smart he is and how much I am jealous of the talent that God gave him without listening to some of his songs and understanding how he makes fun of Pushkin and Putin in the same breath.

Anyway, so this concert.  The hall, at the Philadelphia Russian-oriented JCC, was 100% sold out. But, I swear to God, I lowered the average age in the room by 30 years. I only saw three other people my age there and only one that looked like their parents didn’t make them go.  Most people were in their 40s-60s.

One of the reasons is that Shaov uses a highly satirical, fluid Russian that is hard to understand if you came when you were little like most of us now-20-somethings did.  I don’t have to bring a dictionary, but I do have to concentrate in a way I wouldn’t have to with American music, and man,  that concentration shit is hard.  Pair that with him singing about Chubais, Nekrasov, and Luzhkov, and, forget it. You’ve lost 90% of the people in our age group.  After I listen to one of his songs, I usually have to either Google around a couple of names or ask my mom.

And that’s really sad.  Because it seems like the immigrant generation will go quietly into that good night, and us, the ones that are supposed to keep the magic going, will go quietly into Americanization. Granted, that’s the way things are supposed to work.  Are there any Italian Americans that still speak Italian as it has been passed down from 1900 or any German-Americans that know anything about German culture other than bratwurst?  But it makes me really, really sad. And more than that, anxious for my future children.

Because one of the things I want to give them is a feeling of otherness. I don’t want them to feel 100% American. I don’t want them to be comfortable and settled in their own skin.  I’ve written before, but only for myself, about how I find it hard to tell people that I’m American, as if I don’t deserve it, even though I have lots of American characteristics and speak American English and write primarily in English.

All of this is a long way of saying: WHITE WHINE.