So, last week, MODG wrote about how she got to meet my fave snarky, no-bull TV reality star  Bethenny Frankel while Bethenny was signing bottles in a liquor store while MODG was pregnant AND MODG made her laugh.

I don’t have anything nearly as epic to report, but Gary Shteyngart ANSWERED ME ON FACEBOOK ON MONDAY.

People, this is a huge deal.

As you may know, as I continue to work on my wretched novel that attempts to satirize Russian Jewish immigrants in the United States, the country of Israel, and corporate culture all at once, 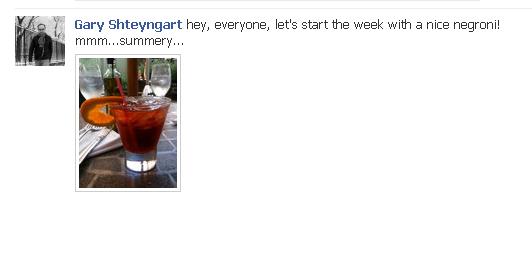 Of course, I follow him on Facebook, so in hopes of getting him to acknowledge my existence

Which is basically an inside joke for anyoen who’s ever watched the Soviet classic movie Brilyantovaya Ruka (The Diamond Arm),  in which one of the main characters wakes up hungover and starts drinking champagne right away and is chastised by his boss, who says “Shampanskoye utrom tolko piut aristokrati i degenirati”-Shampagne is drunk in the morning only by aristocrats and degenerates, only it’s funnier in Russian because aristokrat and degenerat rhyme.

It took me just as long to come up with the joke as it did to explain it just now.

Anyway, so he replied,

which totally doesn’t tell me whether he thought I was witty and clever or just creepin’.

In  my humble opinion, the best way an author can appreciate his fans is to let them write part of his next novel.