Mr. B’s mom inspires me to drive Mr. B to dehydration 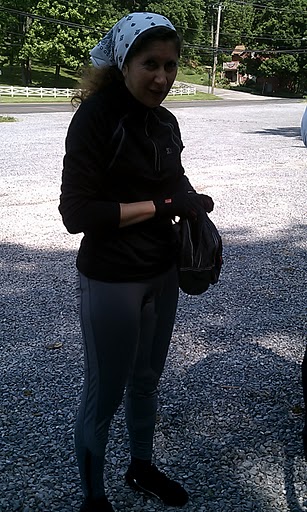 That’s her beasting before we went biking together last month.  I have to admit that I am terrified of her.  Not only has she has proven her mental prowess, she bikes 30 miles per week in addition to tennis and running.

This woman will be running the 5k with us. And she will place ahead of both of us.

So, to train and to not be embarrassed, I prodded Mr. B to bike along along the Mount Vernon trail last Saturday. 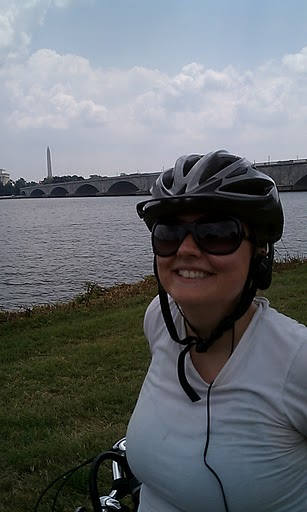 The only problem was, by the time we’d eaten breakfast and walked to the bike rental place (a mile away), it was already 11:30 on a June Saturday in Heatwavington, D.C., and I could feel my skin melting into the sidewalk.  By the time we got on the trail, it was about 95 degrees Fahrenheit and, even though we were drinking water, that water was completing the hydration cycle quickly by going right into the pavement via our sweat.

After an hour, we’d only gone about 10 miles and had to head back to the bike rental place when Mr. B said that his head was hurting despite the fact that he’d drunk all his water and I worried that this time around, I would be the widow and have to go on JDate* to look for new potential husbands.

Mr. B and I recovered, but I don’t know how we’ll fare in the 5k this weekend.  I’m not too worried, though, because I think if we pass out, Mr. B’s mom will pick both of us up and run with us over her shoulders.  It’ll be more challenging and enjoyable  for her that way.

*I’ve threatened to go on JDate before to look for new husbands, but for some reason, Mr. B is usually nonplussed by these announcements because, according to him, “Who else is going to put up with the fact that you don’t peel your own oranges and demand weekly foot massages?”