Did You Know I Was a Chess Queen?

I spotted I spotted in the New York Times which is timely, because I’ve been playing quite the game of chess myself lately. (Note that Kosteniuk, who seems awesome, no longer lives in our Great Motherland but conveniently  resides in Florida, where she doesn’t have to worry about most of her winnings going to fund Russia pressuring Belarus out of cakes and pies not to mention any and all natural resources.)

And, you know, I can relate to the pressures of playing high-profile chess games.  I’ve been playing dozens of chess games lately. Mr. B installed a chess application on my Android phone when he was bored and ever since then I’ve been hooked on winning.

The only problem is that, after two weeks straight of playing at least three games a day, I have yet to win one.   This is made all the more intimidating as Mr. B, a childhood chess champion, stands over my shoulder from time to time and points out all of the wrong moves I make and then, when I offer him to take over the game, wins immediately.  And then when I call him a genius and suggest that he quit his job so that I can manage his genius and make money off of him playing chess full time like that other Jew Weinstein, he modestly demurs and says that he’s very rusty and can’t play very well. Do you understand why more women don’t play chess?

This is all extremely disappointing, especially since Mr. B has previously rejected my plans for him to play tennis for fame and money, create programs to steal fractions of a cent,or become a professional boxer.

The problem here is that, as a Russian, I am expected to play excellent chess to conform to national stereotypes.  And, apparently, also pose nude with extremely large chess sets (this link is surprisingly safe for work).

However,  since I have almost zero logic skills (the kind that would make you consider a career in computer programming and, say, create programs to steal fractions of a cent over time,) I am stuck losing every single time.  So, until Mr. B gets his act together, I will be forced to continuously play the games as depicted below, in hopes that I will be in shape to play for the big bucks.  Someone has to make the money in this family. 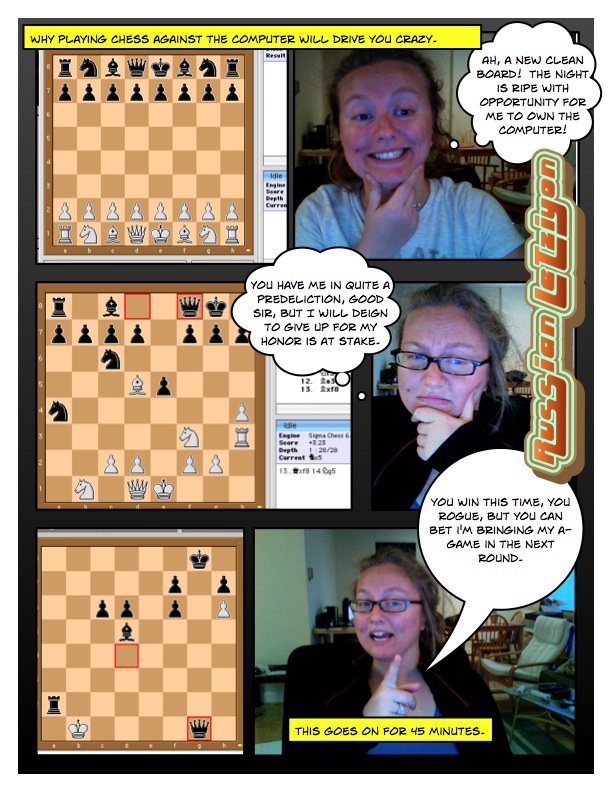