Visiting my grandpa, the Yiddish-speaking atheist

This weekend, as we often do, Mr. B and I went to see the fam.  The fam is enormous, there are lots of them, and all of them need to be seen every time we go to visit them in Philadelphia, especially the grandparents, of which there are four, each of which needs extra time. On the one hand, I know I should be grateful, but on the other hand,  since Mr. B and I are kind of introverted  (what, you can’t tell by the blog?), lots and lots of time with people makes us exhausted and we need to recharge.  So that’s what I’m doing today and tomorrow.

In the meanwhile, here’s a gratuitous photo of me with my grandpa, one of the people we visited: 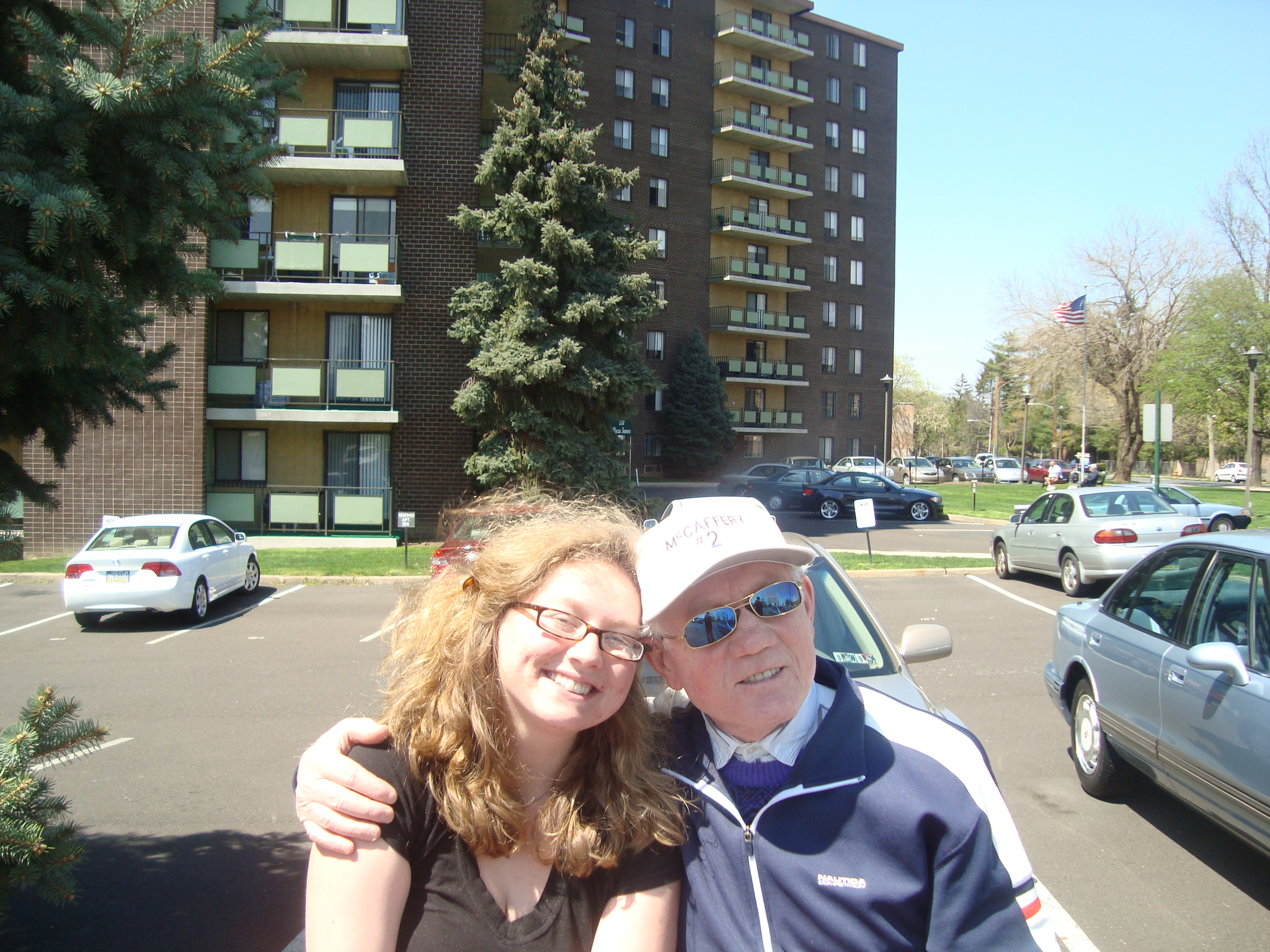 One of the people we saw was my grandpa, who is awesome.   He is old, but he never complains about it like many old people tend to do.  He, like Mr. B’s grandparents, has outlived WWII, evacuation in Uzbekistan, going to work at age 12 to support his family, Stalin, Krushchev, Jewish oppression in the Soviet Union, the death of my grandmother, and still somehow has an enormous and healthy sense of humor.  He is also the only other blonde in my entire family (both natural and in-laws), which makes me feel like I wasn’t adopted.

For every occasion, he has either a joke, an anecdote, or a Pushkin poem he memorized in 8th grade.  Sometimes, he jokes in English, which is crazy, since he didn’t know English until he was 65.  He’s lost some of his hearing from working on locomotives his entire life, so he has the phone set to ring high.  When his girlfriend (yes) jumps if the phone rings from the volume, he tells us that she’s jumping because the Malach HaMovet (Angel of Death in Yiddish) is calling her and she doesn’t want to pick up.   Often, he tells us the joke about how the lines for bread were bad in the Soviet Union and a guy complained and said he was going to kill Gorbachev, but when he got there, he found out there was  a line for that, too.   A couple months ago when he twisted his ankle, I went to visit him, concerned,  to see if he needed anything. He pulled me close, and said, in English, “Let me tell you the history of my pain,” then leaned back and laughed.

On Saturday, he told us the usual jokes, a couple more about Obama and Israel, and then he told me the story of how he was little in the 1930s and his grandfather’s brother, who was more like a grandfather to him,  was living with his family in Reichitsa, Belarus.  That would make him my great-great-great-grandfather, born probably in the 1860s or 1870s.  He told me about how, in the 1930s, Jewish culture was just starting to get stamped out by Stalin (and, later, I learned: Yevsektsiya).  But regardless of this, his great uncle would still continue to suurreptitiously have men over to the house, and they would speak to each other only in Hebrew, on a variety of topics.  “Didn’t they speak Yiddish, like, you,” I asked him.  “No, they all spoke Hebrew, because I couldn’t understand them,” said my grandpa.  “Except for a couple of words like basar (beef) and lechem (bread). ”

I didn’t know this before, and it got me to thinking.  It’s crazy how so much can change through many, many generations.  But the fact that my great-great-great grandpa spoke Hebrew, and now I do, too is really interesting and fulfilling in a circle-of-life kind of way.  “What kind of stuff did they talk about in Hebrew?”  I asked my grandpa.  “Oh, I don’t know,” he said, “I was too busy running around and asking them annoying questions about why God existed.” Some things never change, because  70 years later, he remains a staunch atheist who went to Rosh Hashana services last year for “anthropological observation,” as he told me.