When I was in the third grade, I won a contest or got the best grade in some class-I don’t remember exactly.  All the other kids that won had gotten something like gift certificates to Pizza Hut or stickers, so I was excited to get the same.  Unfortunately, all I got was a book called Words of Stone with the words “Happy Holidays! from Mrs. Moyer,” my third grade teacher,written there. 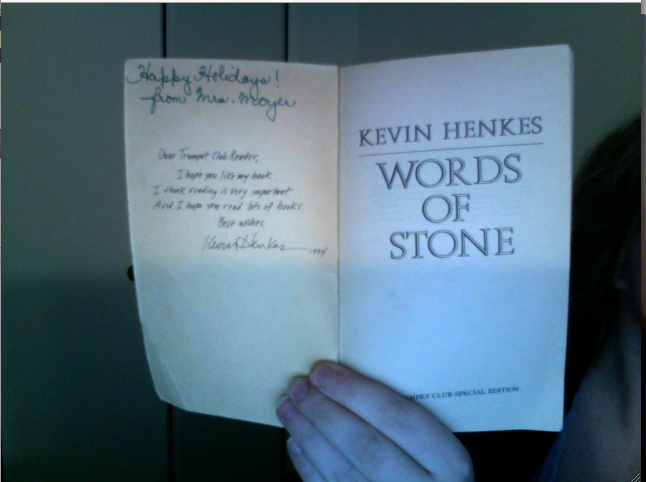 I was really disappointed because  the book had no pictures and no stickers.  I felt really gypped and left it in my room.  A couple months later, I picked it up and read it straight through.

It scared me and fascinated me at the same time.  It was about a lonely little boy, Blaze, whose mom died of cancer several years ago, leading him to be secluded and to just play with his dad and his grandma.  One summer he started seeing his mom’s name, Reena, appear in stone formations in the field near his house.  The work is the doing of Joselle, who comes to stay near Blaze’s house at her grandmother’s after her mother abandons her.  Both are lonely and both form a common bond, although the friendship isn’t what is seems.  That book was one of the first that taught me it was ok to be weird, and about family structures different from my own.

Anyway, the point is that I obviously have treasured this book for a really long time and have picked up a couple of things from it, the most important of which is that Blaze’s grandma, Nova, says rabbit, rabbit, rabbit superstitiously every month, the first day of the month. I picked up the habit subconsciously and now am annoyed if I don’t say it on the first day of the month and expect not such a good month, even though it’s obviously a silly supersition.

Today, I forgot to say, “Rabbit, rabbit, rabbit.”  Tonight while I was headed to the gym, I got into a car accident.

It wasn’t a big accident and only my left-hand side bumper was damaged, and no one in either of the cars was hurt, thank God.  But, combined with the cold, cold darkness of the the past couple months and the not saying of Rabbit, Rabbit, Rabbit, I am convinced that winter is out to get me.  As an economist, I know for a fact that correlation does not equal causation.  As someone who’s already been messed with, I am ready for April.