My Friend Jen, the Human Bandaid 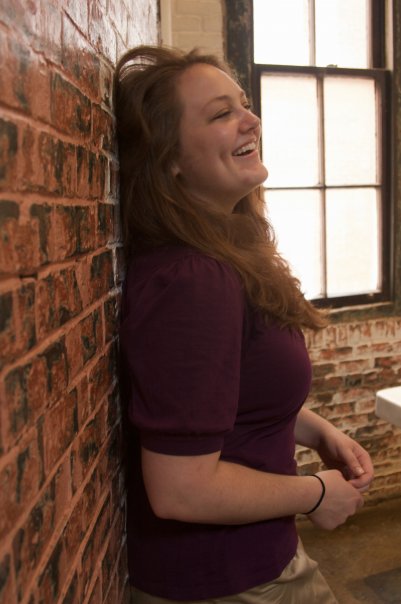 We’ve been friends  since sixth grade.  Now she’s all grown up and doing a master’s program in public health from Boston University and on internship. 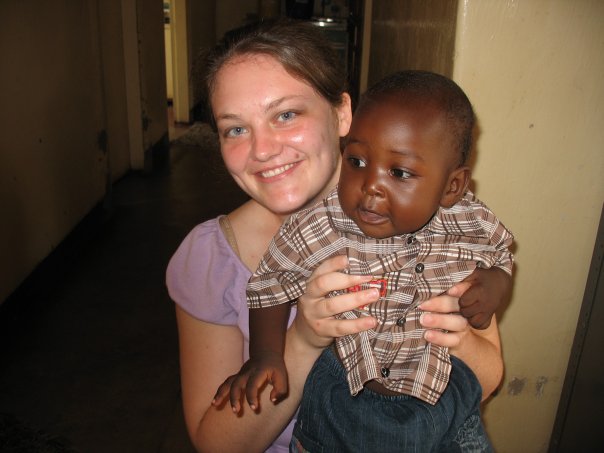 She has a crazy amount of testicular fortitude that I could never dig up, and an even larger amount of compassion and consideration for people that don’t even have the option of fighting over which kind of health care system they’d like their country to have, because their country  has a highly nonfunctional functional system to begin with, specifically outside of the cities.

Every couple of weeks, after a grueling amount of fieldwork and adjusting to life in a different continent,  she writes epic e-mails about her experiences in her internship program in Livingstone, Zambia and said she didn’t mind if I reprinted some excerpts.

[When she first gets to Lusaka, Zambia’s capital]  They are SOOOO nice and gave me a very warm welcome.   Everyone asks me how many siblings I have.  They think it’s so strange how small families are in the US.  Oliver took me to the grocery store to buy essentials and I was sooo disoriented in that store.  I didn’t understand the currency or exchange rates yet.  They took me out for lunch and I met an Irishman who teaches at a school here.  He talked about these crazy 5k course/drinking game that the British contingent in Lusaka runs out in the bush on Saturdays.  Craziness…

What I love about BU’s Center for international Health and Development – Zambia (CIHDZ) is that they employ over 50 Zambians throughout Lusaka and Southern Province.  So I’m not working with a whole bunch of ex-pats from the US, but rather working closely with Zambians to hopefully build their own capacity to carry on this work long after we’re gone.

I found out that I’ll be working on early infant diagnosis and pediatric treatment of HIV programs down in Livingstone.  A huge BU contingent of professors are coming in on Friday for meetings surrounding a huge grant BU just received to work on neonatal health here in Zambia.  4 of my former professors are coming, along with some PhD students I worked with.   Then on Sunday I’ll be traveling with some of them to my new post down in Livingstone.  It’s a 7 hour drive, which is the time it took to go from Boston to my home in PA.  We are stopping over in Choma on the way down to stay with a friend of the director in the bush.  According to him, it’s absolutely beautiful and you see a ton of different birds.

When I get to Livingstone, I’m super close to Victoria Falls, one of the 7 wonders of the world.  I’ve also heard it’s pretty safe because there is more security due to tourism.  The burden of HIV there is about 30%, which is twice what it is here in Lusaka.

On night in Zambia,

So, I have learned to sleep with ear plugs every night because there must be a blind rooster that lives right next door to me and he crows really loudly at absurd hours when the sun is nowhere near rising.  Every living thing seems to wake up at night here so it’s actually pretty loud at night.  I finally killed that big spider and 2 of his friends a couple nights ago.  My shower faucet broke the very first morning and when I told Frida, the administrative person, she muttered something about cheap chinese products.  Apparently there is a huge stigma around Chinese products here and stores even have signs that read “No returns on Chinese products.”  I have also learned that I walk really quickly.  In the US we book it from one place to another, even indoors, in offices, etc.  Here, they meander and take their time.

On Sunday I slept in because there was no way to figure out where or when churches were meeting so I couldn’t plan to go to one.  I hung my clothes out to dry on the line and  then walked around until I heard music and singing and just walked in those general directions.

Later, it had started to rain and I remembered my clothes on the line, but it was too late to do anything about it now.  When I got back to my place that night, my clothes were inside my house on the couch.  The security guard had taken them off the line and pushed them through my window onto my sofa. That was soooo nice of him.  And having put my clothes outside to dry, I then had to iron each thing or risk something like out of a sci-fi coming out of my skin because of fly eggs.  (I know…gross!  Hence the ironing)

At the moment, I’m helping to strengthen the way the clinics collect and report information about early infant diagnosis and treatment of HIV.  I’m also helping out with the training for clinic staff on testing and diagnosis.  I also call around to the district hubs to find out whether or not samples are making it to the labs and back, which in itself is a feat.  The first week here making phone calls, I had such a difficult time understanding people over the phone.  I’m usually ok face to face, but over the phone, it was really frustrating.  I’m sure I was really hard to understand, too.  This week is much better though.

We have huge human resource poaching issues within Zambia.  NGOs, like BU, sometimes poach skilled workers from the health system of Zambia.  Granted, BU works within that system, so it’s more like redistributing, but other NGOs operate parallel, or outside of the system so those people leave the ministry of health for a better paying, foreign sponsored job.  Siavonga District has super poor performance and when I asked why, Mendai told me that the director of health is the doctor for the national football team so he travels with them and is not dedicated to his work in the community.  It trickles down to a lack of accountability through the whole district.

I’ve also learned that just because the samples get sent and results are received by the clinic facilities, doesn’t mean that the mother will actually be notified of her child’s status.  I learned of a set of twins, one HIV+ and the other negative.  The HIV positive one just died before the results were ever disseminated.  In one district 125 results were received by clinics, but only 25 mothers were notified, two months since the testing.  Clinic staff say it’s because they have “no talk time” (minutes, like with a cell phone company in the states), transient families, lack of correct contact info, mothers are told to come back one month or so and if they come back and the results aren’t there yet, they get discouraged and don’t want to come back again to get them for a while.  I’ve also learned that just because the mother knows the status of her child, it doesn’t mean the child will actually be treated.  It is a miracle that this one two-year old with HIV is alive because most children untreated will be dead by their 2nd birthday.  The mother won’t seek treatment for herself or her child because she doesn’t want the husband to find out that she is HIV positive.

We might be getting a DNA PCR machine in Livingstone!  This means that all the samples in Southern Province would come here instead of getting shipped to Lusaka with the rest of the country’s infant testing samples.  This could cut down the turn-around time and lead to quicker initiation of treatment.  It’s amazing how many samples and/or results simply vanish in transit.

I asked Jen what the best way to help is (sending money to Zambia is tricky,) and she said she’d let me know.   It’s crazy the amount of corruption and incompetency that prevents saving lives. 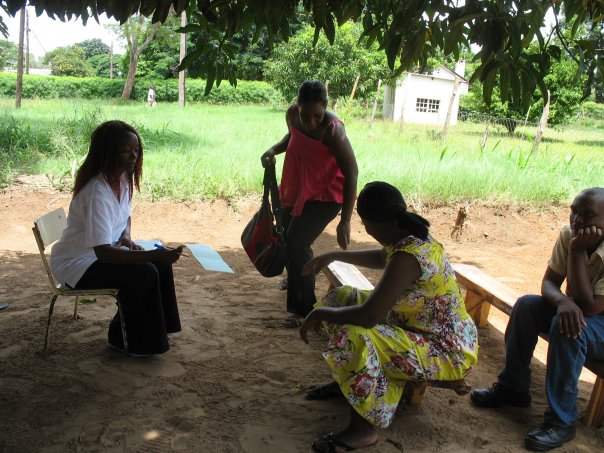 Antenatal counseling under a mango tree.