Ah, I see Hayden Panettiere has been reading this blog and taking my advice. 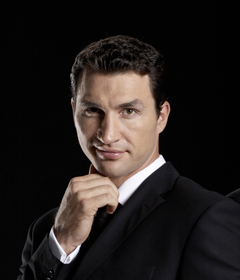 He was born in Semipalatinsk, Kazakh SSR (now Kazakhstan). Though a major celebrity in his former adopted home of Germany, he moved with his older brother Vitali to Beverly Hills in 2004. Their father, Vladimir Rodionovich, was a Soviet Air Force Colonel. Their mother is Nadezhda Ulyanovna.

In the summer of 1996, Klitschko finished Pereyaslav-Khmelnitsky Pedagogical Institute (Ukraine) and was accepted in the postgraduate study program of Kiev University. On 18 January 2001 in a conference hall of Kiev University of physical science and sports, Klitschko presented his doctoral dissertation and was awarded a Ph.D. in Sports Science. Klitschko speaks four languages: English, Russian, Ukrainian, and German. At the beginning of his professional career, he began spelling his name Wladimir. The Ukrainian version of his name is Volodymyr (Володимир), which in Russian is Vladimir (Владимир).

Klitschko appeared with Lennox Lewis in the motion picture Ocean’s Eleven. He is an avid chess player, kite-surfer, golfer, and humanitarian. Both Klitschko brothers have been involved in charitable activities dedicated to supporting the needs of children around the world. Both brothers have formed their own charities that contribute to children in need in Africa and South America.

There additionally appears to be a 13-year age difference.