Here’s a brief synopsys of Srugim.  I have to admit, I am a bit behind the eight-ball on this series since it started last summer and I just now found out about it.  We  both loved it! 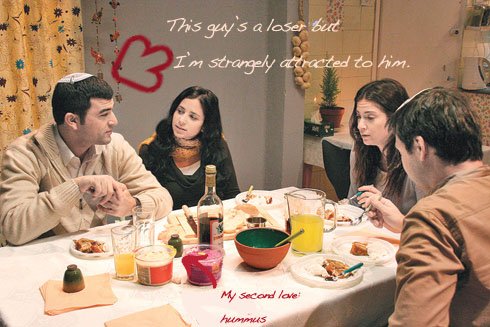 The word sruga in Hebrew means knitted with special indication to knitted kippot (yarmulkes) that religious Jews in Israel wear.  Those who wear kipah sruga as opposed to a completely black kippah or none at all are usually somewhere between secular and Orthodox, a form of Conservative Judaism that differs from its counterpart in North America.

The show, which we watched the first three episodes of,  take place in Jerusalem where we observe the everyday lives of six religious Jews nearing thirty, each with their own dilemmas.  The overriding theme is that none of them are married (and one is actually divorced) and each is trying desperately in his own way to deal with the issue of being alone in a societal enclave that doesn’t value it.

There’s Hodaya (right) and Yifat (left) who live together in an apartment in Jerusalem, one a student, the other a graphic designer, both unlucky in love and frequently going to speed-dating events.  And there’s  Reut (pictured above sitting next to my new man crush) who’s an accountant, a feminist, and possibly the most religious on the spectrum of the three who lives alone.  The two guys so far are Amir (my man crush) who teaches grammar at a religious school for girls and Nati, a med student who meets Yifat at a speed-dating event as much romantic angst ensues. 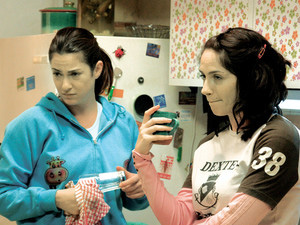 The hook here, is of course, that they’re unmarried, something that’s very uncharacteristic for religious Jews in both Israel and the United States, and they struggle to go through all the dating mind games that, at 30, they shouldn’t have to be going through any more.  The show is close to Sex and the City and Friends in content, but not as saccharine as most United States shows although it does have many of humorous moments, such as when opinionated Reut plays a schoolteacher’s quiet and religious wife to help out a friend, or when Yifat and Nati miss dates with each other because Yifat is going out with an Israeli Air Force pilot that really turns out to be a helicopter pilot.

The suspense all lies in the fact that there is romantic interest between many people in the series, and in that we as the audience ultimately want to see them happy. The writers of the series pull the heartstrings very well.  At the same time, they offer an excellent glance into the lives of Jerusalemites (Yerushalamim) and, as some reviews say, the city shows up as a sixth character.

It seems like Jerusalem is such a presence in the show that it’s almost a character. How would you describe the city’s special role in the series? **Both me and Chava really love this city and wanted to show its beauty. People always say there’s something different about Jerusalem – that it’s so friendly and laid back. The holiness is part of it. Jerusalem has more simplicity, less pretension and a lot of beauty.I’m glad we were able to shoot the first season in the winter, with the soft light on the stones. We were in The Valley of the Cross in November, and I saw the leaves changing colors, which I had never noticed really happening before, and the church was in the background. It was so different – like out of a European movie.

There’s something very Jerusalemite about the sweaters and scarves – something about Jerusalem’s character, even in the weather, that reflects in people’s personae, all huddled up.

I really enjoyed all of the characters, and for some reason, especially Amir, who, I have to say, is a hottie.  Unfortunately, although he is a grammar school teacher, he is pretty much a broken person which makes him much less attractive.  I also very much like Reut, who manages somehow to combine religious tradition that is not always female-friendly and charges ahead, working as a very successful accountant despite the fact that she has a broken engagement coming into the series.

Overall, a great, great series.  I can’t wait to see more, and it gave me the perfect chance to practice my Hebrew.

Here’s what resident film critic Jean-Paul Sarte had to say.  I think JP might have been pulling my leg. 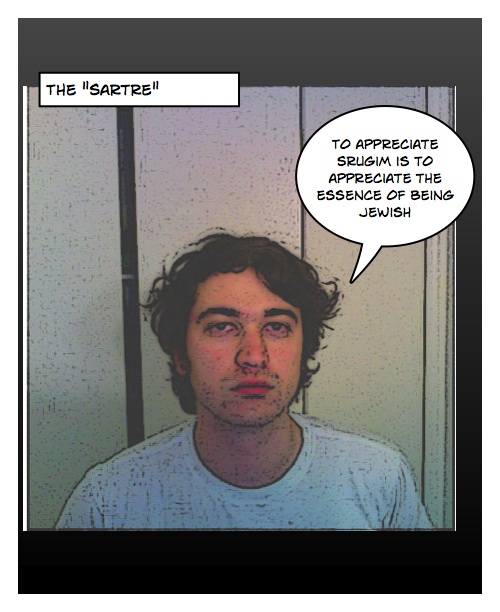 P.S.  I just remembered what Mr. B was saying yesterday; about how the characters in the show were trying to reconcil practices which were thousands of years old with modern life and clashing somewhere in the middle.  Also interesting food for thought.