I came across I came across yesterday, which details the relations between Russia and at Blagoveschensk in Siberia and Heihe in China, across the Amur river. 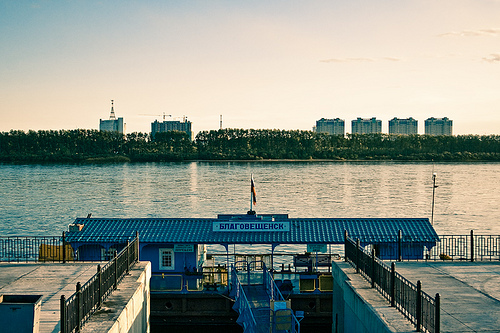 The tension between Russia and China has been going on for quite some time, especially as the Chinese population continues to grow and rend at the seams of the country and Russia’s Siberian frontier remains vastly uninhabited (except, for of course, the Chukchi, who are, coincidentally, my favorite Russian nationality to pronounce, with the exception of the Mordva.) Much like in the United States with Mexico,  the Russians are wary of a possible population rush of Chinese into Russia, flooding Russia with non-Slavic nationals.

This has, ostensibly, created unease on behalf of the government:

All that has led many Russians to fear that China will eventually exert control over the region. “[I]f we do not step up the level of activity of our work [in the Russian Far East], then in the final analysis we can lose everything,” Russian President Dmitry Medvedev said last year. Kukharenko of the Confucius Institute spelled it out for me: “It’s a law of physics, a vacuum has to be filled,” he said. “If there are no Russian people here, there will be Chinese people.

An interesting tidbit from the article:

For most of the last century, this border was closed. In 1969, the Soviet Union and China even fought a battle over a disputed island farther downstream. Hundreds of soldiers died.

As a child of the ex-Soviet era, I frequently hear about travel out of Russia to the West being disallowed (my mom often tells me how she was lucky to go to Georgia, then a Soviet republic, for vacation,) but not often do we contemplate Russian excape into China.

And, the hostility of the Russians with regards to growth:

In one telling episode, in 2007, in an apparent attempt to play up its Russian connection and appeal to tourists, Heihe placed garbage cans that were designed to look like Russian matryoshka dolls around the city. Some excessively sensitive Russians saw this as an insult—Russian culture was trash. The mini-scandal made national TV news in Russia, and the Russian Ministry of Foreign Affairs protested. 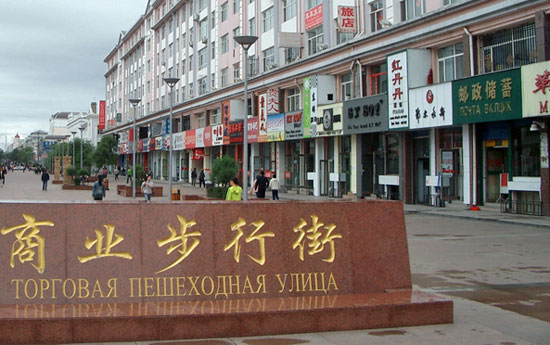 In several small ways, the Russian government has made it difficult for Russians and Chinese to interact. Heihe has street signs in Russian, but there is almost no Chinese to be seen in Blagoveshchensk. While Russians can cross into Heihe visa-free for a short visit, Chinese can’t do the same to Blagoveshchensk.

What’s the disincentive for Russians to reap from Chinese tourism and trade?  Classical economics always tells us that traders are better off than non-traders.  But it doesn’t account for the Russian fear of invaders, especially of the Mongoloid kind, practically ingrained in the Russian psyche for a very long time.

It would be interesting to carry out an economic experiment to see if Blagoveschensk stood to gain from more Chinese living in the region.  The dynamic of the two cities-so close together, yet thousands of miles away culturally and ethnically, will continue to be an interesting scenario to follow over the next ten years or so.

What’s MOST interesting is that China also has a border dispute with its other BRIC neighbor: India.  Wouldn’t it be fun if Russia and China and India, three of the world’s most powerful emerging markets, went to war?

Related on the Blog:

Russian President Medvedev, it’s like you’re trying to fail on purpose by cutting down on beer