Book Review: Japan Took the J.A.P. Out of Me

Vicki’s Note: This book was provided to me by Simon and Schuster for review. 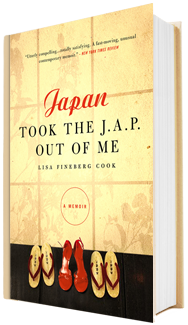 The title of the book says it all- Japan took the J.A.P. out of me. I opened the book, expecting to be taken on a journey as the author, Lisa Fineberg Cook, leaves behind the comfortable upper-class lifestyle she’s used to as a teacher in L.A., six days after an “InStyle-worthy wedding” and embarks on an epic two-year stay in Nagoya (“NaGOYa”) Japan with her husband Peter, a teacher there.

The story is of her journey to become less spoiled and more accepting of Japanese culture and the give-and-take of the first year of marriage, which she chronicles so well.  You know what you are getting into almost immediately when she writes about how she met her husband, “I know what you’re thinking: this guy’s a teacher.  That means a teacher’s salary.  Hardly the Jewish girl’s wet dream bank account…but although I was raised with certain expectations, I didn’t have the gift for sniffing out rich boyfriends the way my high school friend Kim did.”

Yes, she’s one of those.  But she’s brutally honest about it the way I probably couldn’t be if I wrote the same book.  Her pre-Japan Sundays are full of brunch bagels and pedicures and massages, and all of this changes the instant she gets off the lane in Japan.  She and her husband of a week arrive in their new apartment in Nagoya, which is impossibly small, with a “bed that is too small, with an ugly wooden frame and a dilapidated mattress.”  In panic, as they lay down to sleep, Lisa says, “Peter, I don’t see any pillows.”  “I guess there aren’t any,” says her husband stoically.  This new element seems almost beyond my scope of suffering, Cook writes, I have never slept in my life without a pillow.

Here’s where I detached a bit.  Throughout the book, I’m not sure whether Cook is playing up her JAPiness to keep the highly comedic pace of the novel, or whether she really felt that not having pillows was suffering.  As someone who’s slept soundly on airport benches, floors, in a kibbutz room with six other girls, in roach-infested apartments in Jerusalem and hotels in Paris overlooking soup kitchens, with and without pillows, I honestly cannot relate to Cook, which may have been the point. I think I at least would have been a bit more excited than she was initially to spend two years in Japan.  Mr. B and I often talk about living abroad for a year-Tel Aviv, Stockholm, Bangalore, anywhere where we can break ourselves out of our shell of American complacency.  So Cook’s forced exile seems like a gift to me. 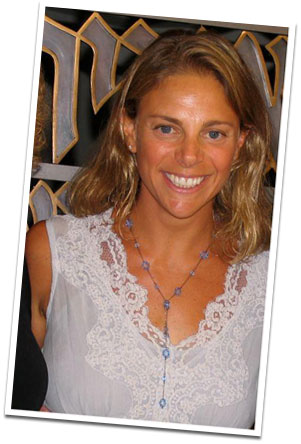 The first couple months are the toughest for her, and she recounts her grounding with fast-paced humor and candor that are most like a diary.  She fights the washing machine, being far away from her family, and learning how to navigate a completely foreign and sometimes hostile and lonely environment.  One thing that I do completely agree with her on is her conflict between being a modern woman and learning how to be domestic and take care of a husband, as well as all of the soul-searching that comes with settling into married life.  She writes, “I confess that when I watch Peter having an apple and wasabi peas for breakfast, I feel twinges of guilt.  I’m not working yet; I don’t do anything all day except laundry; why aren’t I cooking?  Probably a little part of it is my unwillingness to completely give up my illusion of feminist independence.”

Why should we feel guilty when we don’t cook and our husbands don’t eat for themselves?  And yet, we do.  I know I do. But why?  I used to not ever cook and eat cereal for dinner and be fine with it.  Hell, sometimes, I still do.  where is the compromise between domestic housegoddess and cold-hearted independent sorceress?  However, I can’t get behind not cooking if you’re not working, and again, I lost quite a bit of my sympathy for Cook as the protagonist.

The other major thing that frustrated me in this memoir was Cook’s inability and, frankly, lack of desire to fit into Japanese culture rather than observing it in much the same way one would prod a jellyfish on the beach.  She often writes of bizarre, humorous moents that happen to her that are welcome in any travel memoirs, such as the Japanese love for karaoke or grown men reading porn on the subway without anyone so much as batting an eye.  But cook repeatedly mocks the way Japanese speak English, a fact that is embarassing because she is in their country.  When a friend offers to teach her Japanese , she writes, “That’s what I want-more Japanese.”

The reason I harp on so many of this issues in what was otherwise a light and witty memoir was, that, in the end, where the novel concludes after the first year, I don’t think it lived up to its title.  Japan hasn’t yet taken the JAP out of Lisa after her first year-she hasn’t learned any Japanese, expresses no true interest in sightseeing or culture and freaks out at the thought of going to a sushi restaurant with friends.

Maybe I am being a bit harsh on Cook using my standards when, in general, she’s written a funny (if sometimes rambling and self-absorbed) compilation, because mabye the book is more about her becoming a newlywed rather than her travels in Japan.  She does have great accounts of life in Nagoya, of teaching in a Japanese school, of being touched when she goes to Hiroshima.  In addition, she is extremely honest about her marriage and has a knack for comedic timing.    I also found out it’s being made into a movie, so clearly someone saw in the book something more than I did.