I think it’s really been a while since we’ve had a comic.  I promise to get back into normal comic-ing schedule once this insanity (NaNoWriMo) is over and I can have my life back.  In the meantime, enjoy.  I know it’s not the best. As in, you couldn’t pay me to look at it. But Michael is about to get sunburned and I totally needed to focus on that.

The comic is based on all the hype that’s been going around about Ayn Rand lately, particularly two new books that have been written about her, one about her connection to economic thought and the other about her personal life, (here’s another take, by the New York Times) in which she was just as unhinged as I will be after I’m done with The Novel.

I was so excited to read her in 8th grade (for the record, I did finish The Fountainhead, but then promptly slit my writsts for my own good afterwards so I’d never have to pick up one of her books again.) I waded through the book like a fisherman wades through a creek filled with pirhanas.  I was fascinated by Howard Roark, by his obsessive quest to remain alone and by the buildings he erected, just by looking at them with his steely blue eyes.  I didn’t come away a Randite, but I was curious as to what kind of woman would be able to pull off writing such a book, and I researched her a bit.

And then promptly lost all respect for her when I found out she covered up her Russian Jewish identity, cheated on her husband with one of her “disciples” and was hopped up on methamphetamines to write. 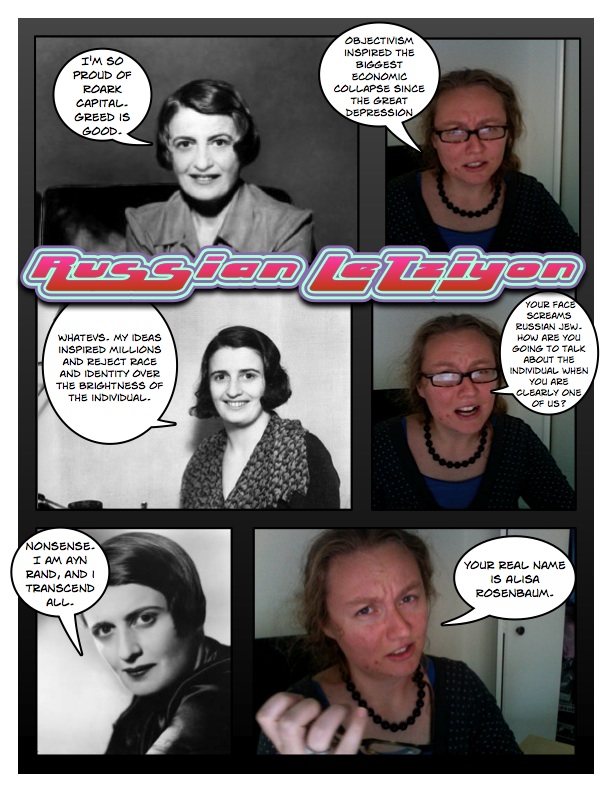