Ringtones in Ramallah or Pelephones in Petach Tikva 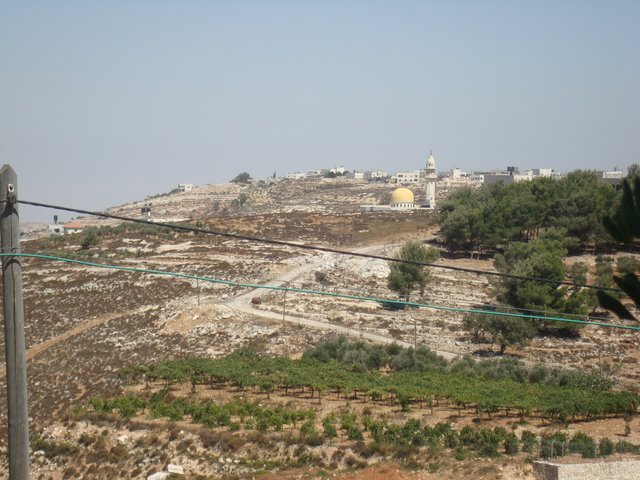 One of my pictures from the West Bank. It's one of the most beautiful places in Israel. Or outside of it. Pick your poison.

Today, I thought I would take a break from writing NaNo posts (I’m at 12,164 right now!) and report on an interesting issue:

After months of delay, Al-Watania, the West Bank’s second cell-phone carrier, began its operations this week, offering its customers the latest in telephone technology.

And while the company’s customers won’t be able to pick up their new flip phones and call Israel—bureaucratic restrictions and mutual resentments make communications between the Jewish state and its Palestinian neighbor nearly impossible—they will be able to download ringtones of their favorite songs. The most popular option, by far, is “Allahu Akbar,” meaning “God is great” and a common phrase in Muslim prayer. It is followed closely by pop tunes from around the Arab world, such as the Egyptian singer Saad el Soughayar’s hit, “She Loves You, You Donkey.

It’s like I don’t even have to make up the satire anymore!  Anything that happens in the West Bank/Israel from now until November 30th that is even remotely interesting or funny is playing itself right into my novel. And I would love to hear this video.  Unfortunately, my Arabic is rudimentary and I have no clue what to search for on YouTube.

I have to admit, as I read this article, I didn’t know anything about the cell phone situation in the West Bank.   I know that Israeli cell phones work there because I was able to call my mom on a rented Amigo phone from somewhere between Efrat and Jerusalem and make her afraid that I was getting kidnapped by Fatah militants   while in reality I was drinking West Bank wine, but that’s the extent of my knowledge.

I started by digging deeper.  All I found to begin with was this (written by a professor at my alma mater, Penn State, and one I got to meet, Amit Shechter!)  which is interesting in its own right and describes the early history and culture of cell phone communication in Israel.  One of my favorite tidbits from the book is this:

And it’s very interesting because the first company, Bezeq, was a monopoly much like the West Bank’s Jawwal was, with a second carrier only being added in 1994.  Of course, the historical timeframe and political situations are much different, so it’s not exactly an apples-to-apples comparison.

By the way, here is another picture of Jawwal in Gaza:

Executives at Jawwal, the Palestinian cellphone company, sat last week at their work stations in blue jeans — as at the end of every work week it was Casual Thursday — and said their jobs were getting harder because spare parts and training were unavailable. Their senior managers, who used to travel abroad once a month, now cannot travel at all.

For the most part, it’s great news.  On the one hand, I can see why establishing two cell phone networks in the West Bank would be a huge issue, mainly because of reports like this.   But also, more importantly, I think:

Wataniya said the new company would create 2,500 jobs in the West Bank. Blair said the carrier would inject $700 million in investment and $354m. in one-time licensing fees into the Palestinian Authority.

This is exactly the kind of stuff that the West Bank needs. Because no one ever talks about business in the West Bank.   The more investment there is, the better the nascent Palestinian economy becomes,  the less poverty, and the less breeding ground there is for radical Islam, which benefits both Israel and the Palestinians.    Of course, it’s not the entire solution, but it is definitely a promising start.