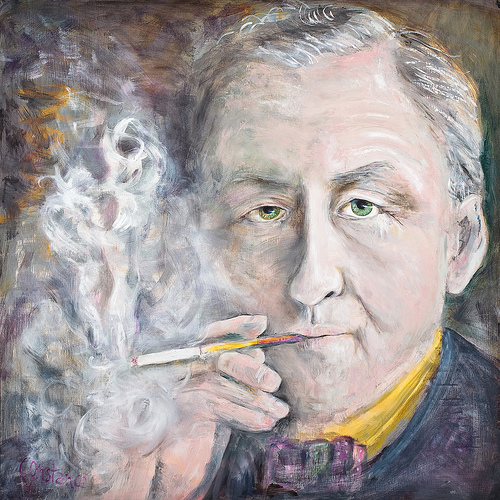 Portrait of Ian Flemming, or Daniel Silva 1.0 beta, via ConnArtist on Flickr

_In November, I’m going to be participating in NaNoWriMo, National Novel Writing Month, where you write a 50,000 word novel in one month. The goal is to just write, without excuses, and to do it with people who are also doing it, making it easier.  I don’t know if I’ll be able to do it, but I’ve had a novel inside of me for as long as I’ve known how to write, however corny that sounds.  So, I’m limbering up by immitating some writers I’ve read recently. Come support me!

The book I read on the flight to and from Israel was, appropriately Daniel Silva‘s book about Israeli Mossad spy Gabriel Allon.  He has several books about the iconic Mossad figure, the latest called Moscow Rules, named after the Soviet spy code that is all too active today, where Allon goes to Moscow and the rest of Europe to track down an infamous Russian oligarch arms dealer.  The plot is exciting enough, and at the end of the book, I surprisingly found out that it was extremely well-researched, but the dialogue is horrendous and the book is ridiculously cheesy, catering to an audience that doesn’t know humus from Hamas.

On our El Al flight to Tel Aviv, I read the cringe-inducing conversations between characters and fought off Chabad rabbis who constantly wanted to lay tefillin on Mr. B.  I thought, I could write a similar boiler-plate action story covering all points of the globe, rich in regional detail and contrived spy wisdom.

“Damnit,” thought Israeli agent Amit Barak as he sipped his half-skinny cappuccino on a brisk March morning in St. Marks Square, the pigeons circling him as ominously as that time he was in Gaza and Hamas terrorists were circling him ominously.  For a second, he felt PTSD from the pigeons. He added some Italian sugar cane to his cappuccino and opened his dossier as Avi, his backup, sat nearby and surreptitiously cleaned his Glock.  Avi always cleaned his Glock when he was nervous or awake.

Barak sipped his cappuccino as he read his dossier, frowning in concern.  The cappuccino was scalding the roof of his mouth.  He put it down.  The dossier made him frown, too.  It was on a terrorist in the Islamic Resistance movement rising up in the West Bank town of Qalqiliya.  Qalqilya was one of the only towns in the West Bank where Hamas had won over Fatah in the recent elections.  Much to Hamas’s misfortune, the nearby Russian-majority Israeli town of Ramat Liberman hadn’t taken kindly to this, and had started throwing rocks at Qalqiliya.  In response, the residents of Qalqilya had begged to have a separation barrier put up to defend themselves from the Russians.  Some of the more radical elements had started a fringe movement called Hamas Beta Release Version and were now infiltrating Israel, installing ugly screensavers of Hamas Betas blowing themselves up in every Internet cafe from Ashdod to Akko.

“This is not so tov,”  Barak thought to himself.  He glanced over at the pigeons again.  Just as he was going to ask Avi to shoot one of them, A Woman with legs as long as a Soviet food line and hair as dark as the electricity blackout in Lebanon after the 1982 invasion walked by.  She smelled like roses that had been cut just this morning and had all the life tortured out of them to provide a full, lush scent for this alluring signorina.   She barely looked at him through her gray market Gucci ripoff shades and sat down two tables away.  She took out a copy of Heeb Magazine and ordered a water with lemon after making sure she wouldn’t be charged for it.  That was his cue.

Barak nodded to Avi, Avi nodded back at him, and both of them moved two tables over.  “Donde estas your gun,” Barak asked the woman in impeccable Italian, and she replied, “In Dimona,” which meant it was strapped to her leg.  Any higher, say, around Hadera or so, and Barak would have been panicked.

“You know why you’re here?” Barak asked her, taking out a cigarette and smoking it, then immediately remembering he didn’t smoke and putting it out.  “Yes,” the woman replied, her voice as silky smooth as a Dove Promises Silky Smooth Milk Chocolate Bar after two hours in the car at 72 degrees Farenheit. “I will be infiltrating the Hamas Betas.”

Barak nodded.  “You have 72 hours to complete this mission, Tallit.  Remember that the Israeli people are depending on you. Even more than they depended on the invetion of mazgan.”  She nodded calmly.  Just as she was reaching into her knockoff Louis Vuitton, a dark-skinned man rushed by and grabbed it from her.

“Avi,” Barak yelled to Avi, who was texting his cousin Eyal in Holon to see if Beitar Yerushalayim had gotten anywhere in life, “who is that man?  Run after him!”

“I can’t, boss,” Avi shrugged as he looked up from his screen, “that man is Arab, and if I ran after him, it would clearly be racial profiling.”

“What do we do?” Talit cried out in shock.