Russian President Medvedev, it’s like you’re trying to fail on purpose by cutting down on beer

So, I was listening to NPR the other day to get my dose of News White People Like, when I heard a story about how Russian Lifeless Puppet Government Agent President Dmitry Medvedev is trying to curb alcohol consumption. And then my mom sent me this story, which is even more alarming.

The gist is this. The Russian president has now woken up to the fact that there is alcoholism in Russia, a fact which he was apparently not aware of for the last 800+ years, or since vodka was first introduced to my suffering people (my other, people, the Jews, have also been long-suffering, but lacking the Macguyver-like skill of making sorrow-drowning liquor from potatoes, moved on to found their own state in a desert and have even featured a major role as a running gag in an Adam Sandler film.)

And just now, he’s realized that he has a demographics crisis on his hands.  Because the average Russian male’s life expectancy is horrifyingly low compared to some countries, and the country is huge, and the Russian Muslim population is on the rise, which is bad news bears for a country that very strongly is trying to retain its national identity (reading Dostoevsky and complaining about having to read Dostoevsky.) 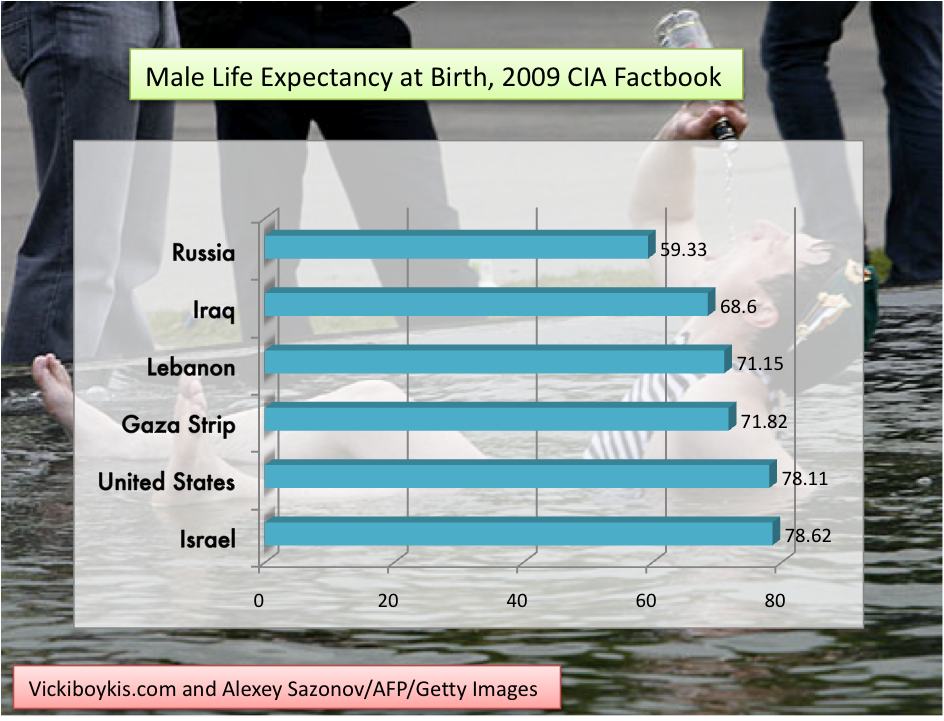 Yes, it’s true.  Russian men have less of a chance of surviving than do the inhabitants of the Gaza Strip, which the both the Israeli military and Hamas use regularly as a practice dartboard. So, what is Dima’s plan for the fact that all the men are dying out of vodka poisoning and Russian women will, at some, point be forced to marry Muslim men that they’ve been taught to hate their entire lives (which actually sounds like a great idea for a sitcom.)?

Curbing beer consumption and restricting sales to minors.  Le what?

The latest move to catch Russia’s “green serpent” has a three-pronged strategy: a media campaign, restrictions on beer consumption, and strict penalties for selling to minors. Russian officials plan to set up more than 500 health centers by the end of the year, complete with Soviet-era tactics like drawings of cirrhosis-stricken livers on their walls. Outside the government, a grassroots organizing group called Our People plans to launch its own anti-vice campaign of online videos and flash mobs. It intends to send crowds out to gather around unsuspecting smokers on the street, walking alongside them and admonishing them to quit. It’s still working out a strategy for scaring alcoholics. If its targets are already drunks, they will likely be harder to spook if they’re in their cups.

Because Russia will be able to go against the laws of economics.  You know how, the more you restrict supply of one thing, the more people will switch to complementary goods? So, if you restrict beer sales, people will automatically switch to vodka?  So why not just restrict vodka sales, Dima? Because the Russian government is deadly afraid of what could happen if Russians aren’t allowed to drink vodka.  They will have an even bigger crisis on their hands.  Like they did last time Gorbachev restricted vodka sales:

Former leader Mikhail Gorbachev got alcohol sales to decline by 60 percent (although, it should be noted, that drop was partly offset by an off-the-books boom in moonshine and cologne). The official numbers revealed an impressive bottom line. In the second half of the 1980s, Russian officials say, the policies saved more than 1 million lives. Still, that achievement came with its own costs: the government had no qualms about hacking up vineyards, for example. At the same time, the suddenly scarce alcohol supply often led to long lines of exasperated customers prone to brawling.

Note how I bolded moonshine and cologne.  This is not made up.  In fact, Mr. B’s dad recalls a time when he was at work and  his friend drank machine alcohol because there was no vodka available.  Only he didn’t purify it, so the next day, his face swelled up and he couldn’t open his eyes.   That’s Russian determination for you.

So, good luck, Dima, trying to solve an inehrent cultural problem with pure economic logic that is inherently flawed. I think what you gotta work on more is the fact that the supposed enforcers of this policy are frequently wasted (but not so wasted that they can’t put it on YouTube.)