Outsourcing-it’s not that bad: A comic 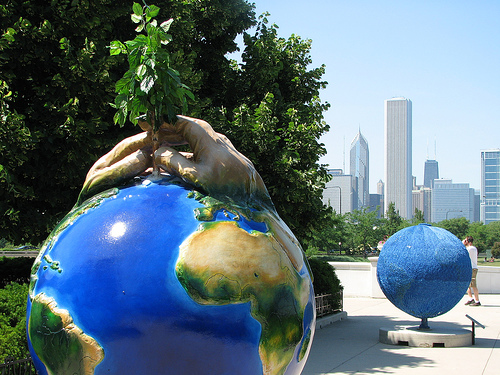 I’d studied outsourcing before in our econ classes in college and knew intuitively that it could not be as bad as many had said, but couldn’t remember the reasons why, so I decided to do a little more research on it. I promise this will not be boring.  Or your money back.

Before we get started, it’s important to understand a fundamental economic term: tradeoffs.  We are always, always, always making tradeoffs.  I make the tradeoff between eating breakfast so I can function at work and being on Twitter to catch up with news.  Usually the former wins.  You make a tradeoff when you decide to work overtime for more money or go home early and spend time with your family, depending on what’s more important to you.  This is what’s known in economics as, There’s No Such Thing as A Free Lunch.  Maybe the lunch you got is pizza, and then you have to go burn more calories on the treadmill to burn it off.  The lunch wasn’t free, because it took away from your time and your health.

The basics of outsourcing (also known by a similar word, offshoring,) are that the manufacture of a product or service is given to a third-party company because it is cheaper and more efficient, something companies in capitalist societies constantly strive for since they are in competition with millions of other companies doing the same exact thing.

Some recent examples of outsourcing have included not only computer services, but, as a Foreign Policy by Grossman and Hansberg says,

For example, say I make software code.  And I make it pretty well, despite the fact that my staff is alcoholic.  However, I just can’t compete with other software firms around the country, not to mention around the globe, and I decide to outsource it: 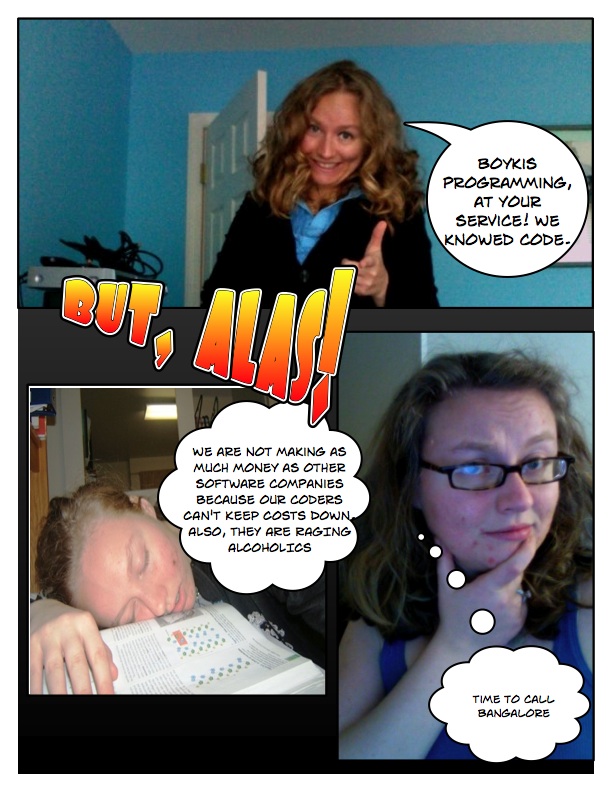 So, I call up my contact in Bangalore, which is the outsourcing capital in India, due in part to state government support of computer industries there. 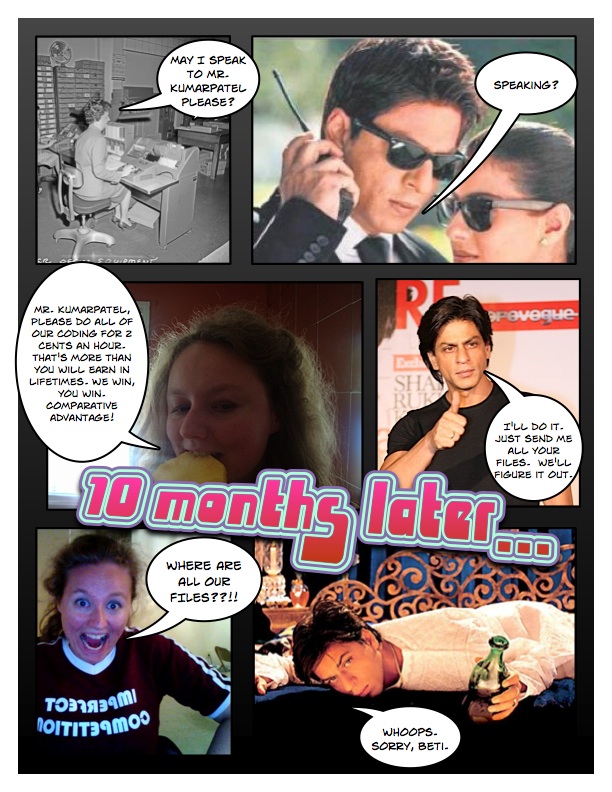 The Pros and Cons of Outsourcing

So, as you can see, outsourcing’s not all it’s cracked up to be.  Although it is cheaper for employers to do so, it comes with hidden costs, including training employees, running a data connection from the US to wherever you’re outsourcing to, and the perils of the learning curve.

As a result, there is a great deal of debate over the benefits versus the negatives of outsourcing, a fact that is stated in a 2006 study conducted for the US Congress and the Bureau of Economic Analysis.  The study notes,

The most common public perception of the effect of off-shoring is that direct job losses occur as  activities are relocated.  But, this direct, short-run effect of a gross loss in jobs is difficult to measure  and may differ over time if the expected gains from the decision do not materialize as anticipated.  Not surprisingly, decisions to reverse an initial off-shoring move are not as well publicized as the initial off-shoring decision. In addition, public concern over direct job losses assumes that current domestic operations would have remained unchanged, but this assumption may not always be appropriate.

I bolded the last part because I thought it was particularly important.  The fam has complaints about how outsourcing has destroyed jobs for those they’ve known.  But you can’t assume that your job will remain static even without outsourcing.  Moreover, the long-term benefits of outsourcing may be more than short-term losses.  Let’s put it this way; I lose my job today to SRK.  I lose my current source of income, which sets me back for six months or so, until I find a new job, a possible loss of $25k.  However, the code that I write is to make cars and the people who take over my job improve the code, making it cheaper to buy a car.  I buy one, saving $10k off the price due to efficiency.  Case in point?  Silicon Valley’s outsourcing more than ever, and its local economy is booming more than ever. Another case in point?  New York State is gaining jobs due to outsourcing.

The next year, the same thing happens with computers.  How much of these implicit costs, these tradedoffs do we think about in our everyday lives?  We don’t, because it’s easy not to. If I don’t buy a candy bar, I don’t think about NOT spending the $1.50. I use it towards my next purchase.  And so is the case with outsourcing.

Additionally,if the people whom we outsourced to are bad at it, we either take it back (which was the case in some companies I actually know,) or we give it someone else, which is the reason Bangalore is no longer the top destination for outsourcing.  And even in those two articles, managers point out that they can be very hesitant to outsource:

But moving IT operations into developing countries like Vietnam or China can also pose big risks, such as insurmountable language and cultural differences, geopolitical instability, and the risk of stolen intellectual property. “You keep following the money, but how often are you going to move people around?” asks Cohen. Even the routine day-to-day management of an offshore team can require significant project management expertise. “If you don’t have experience and don’t do it well, it can negate savings,” says Barry Rubenstein, program manager of application outsourcing and offshore services at IDC.

Let’s look at the key metric:  Jobs lost.  How many jobs has the United States lost to outsourcing?  Again, the answer is hard to measure against anecdotal evidence.  I was getting all ready to put in some data here, but the only numbers are those provided by the Heritage Association and an estimate by the Census, which says 400,000 jobs were lost to outsourcing in 2004, way, way before any of our economic issues.  So, until I find some further, more recent studies on jobs impacted, I can’t say precisely whether outsourcing is positive or negative, but just through reasoning, I tend to lean on the side of positive, improving both economies abroad and at home.