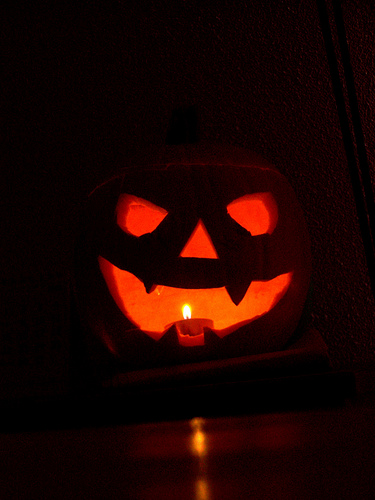 Oh, what horror!  Oh, what fright!
Has arisen from the dead-
What disturbs me on this night,
What ghoul phantom rears its head?

On the eve of Halloween,
When all good souls are asleep-
Ghosts of fears yet to be seen-
Graze my forehead in my sleep.

As I lay in bed, exhaling,
Muffled footsteps near the door-
My heart pounding, then a wailing.
Like a gale upon a moor.

So, I crept into the kitchen.
Where the light was wan and yellow.
Gasped in shock, for there was standing-
An unopened jar-NUTELLA!

It did nothing-I skipped heartbeats.
I had eaten it last night.
Why now, suddenly, a sequel
Here to tempt my appetite?

Had I not devoured slowly?
Creamy chocolate with a spoon?
Had I not thrown out the remnants?
By the pale glow of the moon?

It stood still.  My neck hair prickled.
Were my eyes just playing tricks?
Had some chocolate really trickled?
From its lid, onto the bricks?

Reaching for it to replace it
To my pantry, on the shelf,
When it bit me!  With its white fangs!
Rasping, “I can move  myself.”

As I smarted from the contact
I expounded, “Ain’t that rich!”
It replied, matter-of-factly,
“I’m haunting you ’cause you’re a bitch!”

“Do you not have home recycling?
Where you should have put me first?
Do you spit upon our planet?
Face it lady, you’re the worst!”

“And not only did you eat me,
Quickly so Dan wouldn’t see,
But as you made to deplete me-
Lady, you just killed a tree!

It jumped up upon the counter
With a force I’d never seen.
And it hissed and made me flounder-
Made me gasp on Halloween.

“Yes, we live in White Bethesda,”
I regained my power of speech.
“But we’ve never used recycling,
But I’ve never killed a beech!”

“Just because we seem like hipsters,
Doesn’t mean we follow trends.
Better stop giving me lip, sir!
Let’s make up and make amends.”

“Why’d you think we would recycle?
Do we drink cafe au lait?
Do we get to work by cycle?
Do we crucify Bill Gates?”

“Do we have Obama stickers?
On our Prius in the drive?
Do we post our shots on Flickr?
Do we Livestrong while we’re alive?”

“Listen here you Russian reject,
Oh, you communism waste,”
The jar came on toward me slowly.
“Soon enough, you’ll get a taste.”

“It’s the folks who think like you-
Who hate the earth, just as you do!”
Oh, pollution, woe is me!
Recycle, bitch, and be happy!”

“Did you know that your recycling
Doesn’t really help the earth?”
I said, trembling at its molars,
“What’s the point? Where’s the worth?”

Many things then happened quickly.
The jar leapt and I attacked.
As its chocolate maw drew closer-
I grabbed a spoon and beat it back.

And soon, it was in a corner.
Trembling, it let out a sob.
With the jaunt of a new mourner,
I opened it and ate a glob.

The evil spirit then departed,
No longer haunting me in sleep.
We were back where we had started-
The can, in trash bags, in the deep.