My friend Jane Charney bails me out again with a thought-provoking post about Halloween costumes: 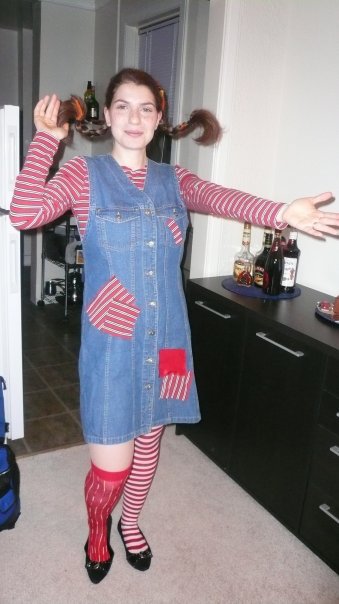 For two years in a row, on Oct. 31, I’ve stuck pipe-cleaners into my braids, painted some exaggerated freckles on my face and put on two completely mismatched knee-high socks. I’ve impersonated my favorite children’s literature role model – Pippi Longstocking. And I’m not going to do it again this year.

In fact, Halloween is this week, and I barely have an idea of what I want to be. In years past, I’ve been a flamenco dancer, a pirate, and a Renaissance damsel. This year, I’m considering giving a nod to my evil side and going as the devil’s sidekick. On second thought, maybe not.

Even larger than the question of choosing a costume is whether I ought to be celebrating Halloween at all. Does dressing up for what is basically a pagan holiday make me any less Jewish? Some friends and I had this exact discussion recently.

One friend noted that since I keep kosher-style (I don’t eat pork or shellfish and separate meat from dairy) and am strongly in touch with my Jewishness, it seemed incongruous that I’d be willing to go along with Halloween.

Sure, let’s make Halloween yet another occasion that appears to require some identity negotiation. The dark magic overtones of the holiday – not to mention its pagan origins – would surely prevent me had I been an ultra-Orthodox Jew.  But I’m not sure that the masquerade has any bearing at all on my Jewish identity. For my secular Jewish self, Halloween has absolutely no religious overtones; though I do know some Wiccans for whom Halloween, also known as Samhain, marks one of the most spiritually charged days of the year.

For me, Halloween is a cultural celebration that marks my acceptance of my adopted homeland. It’s also frivolous and ridiculous. And ridiculously fun!

As a child, I used to love dressing up for the New Year carnival. Usually, the girls would be snowflakes or little bunnies. I wasn’t enthralled with the idea. In third grade, I made my New Year debut as The Night. I wore a black tiara with a long mantilla, a black leotard and tights and a black gauzy skirt that my mom had sown together for me. Come to think of it, a recreation of this costume might be perfect for Halloween!

And guess what? Even if I was going to a run-of-the-mill bar, I wouldn’t feel any less Jewish at heart!

_Jane asked for my thoughts on the issue as well.  I don’t see any conflict for me between celbrating Halloween and being Jewish, but that’s because I’m not religious.  As a secular Jew, I compare Halloween to Purim. Of course there are the dark, pagan undertones of the holiday, but I think Judaism has lots of dark, pagan undertones anyway that we conveniently choose to ignore.  Plus, I couldn’t think of anything worse than denying my children of this holiday that everyone celebrates; I remember going trick-or-treating and some houses’ doors would open, but without candy, and a sad little girl standing behind a mom saying, “We don’t celebrate Halloween.” Also, I loved Pippi as an awesome girl role model.