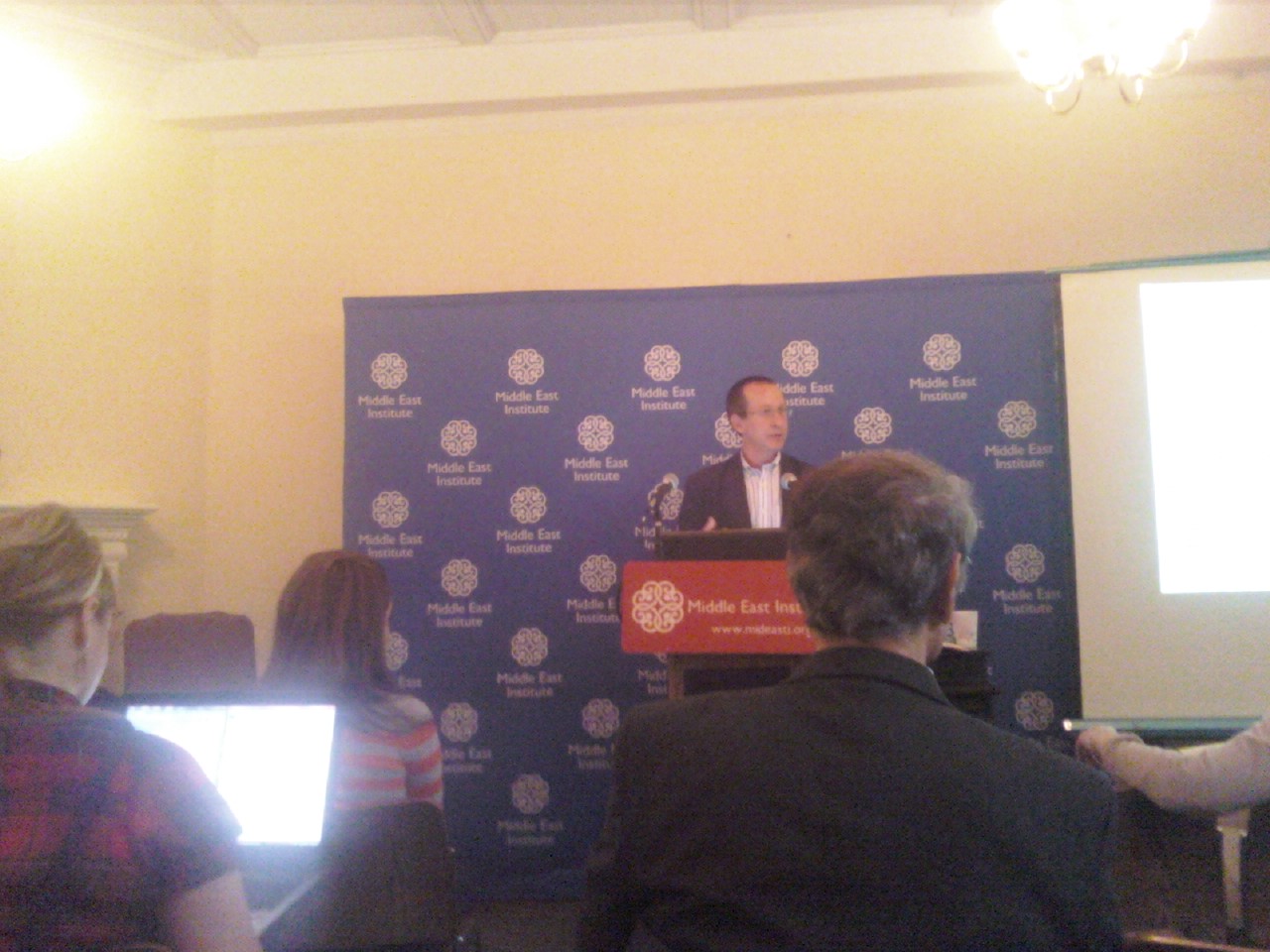 One of the things I love most about working in Washington, D.C., is the enormous amount of think tank lectures (for free!) constantly going on in the District, many only a couple blocks away from where I work.  I am extremely, extremely lucky.  That’s why I was so excited to go for the first time to the Middle East Institute a couple days ago for lunch to hear Asher Kaufman speak about the village of Ghajr (taken with my stalkerphone cam, above.) Here is what I learned from the notes that I took on Dr. Kaufman’s lecture, below. (Too bad I don’t get brownie points.)

Ghajr is a village that has a unique geopolitical situation, but unfortunately, one that is all too common in the Middle East.  As a result of frequent border redraws, the citizens of the village now find themselves in a quirky situation:  they are currently Israeli citizens and receive all the benefits and work in the state including fluency in Hebrew among the men, but part of the border is in Lebanon, and the inhabitants are Arabs of Syrian origin with strong ties to Damascus.

This issue began in the 19th century as a village fully within the scope of “Lebanese national boundaries”, as shown by a map drawn by French cartographers exploring the region in 1862.     Before 1967, however, due to some poor British cartography, it fell under Syrian control, and is shown as inside the (then) Syrian Golan Heights in a map in 1942.  This makes the most sense, given the small population of Ghajar is Syrian Allawites that strayed far from Damascus approximately 300 years ago, close to the Lebanese border.

Here’s Ghajar today, to give you an idea of how the boundaries intersect: 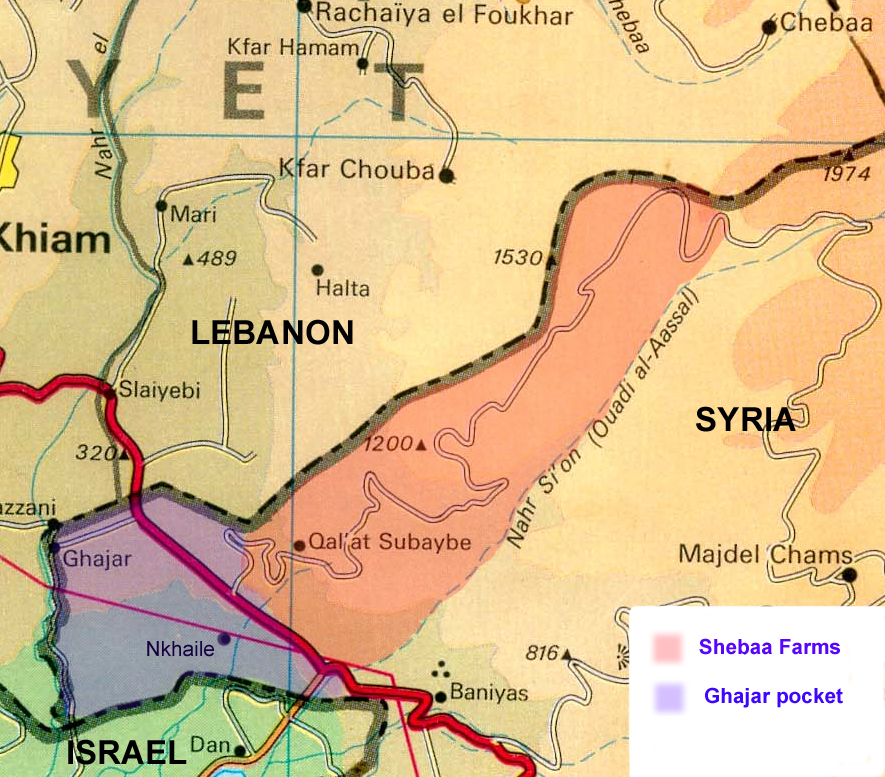 In 1962, the Lebanese cartographic system was reogranized, and the UN maps of the area were also changed; the 1963 UN map was based on a typograph which put Ghajar in Lebanon, a mistake that carried through several generations of maps, including Israeli maps that picked up on it, as well.  In 1967, after Israel won the Golan Heights, new Israeli cartography divided th region, and in 1981, the residents of the village (which is theoretically split into north and south, with the north side in Lebanon and the south side in Israel), received Israeli citizenship, but the status is currently under debatable sovereignty, with the possibility that Ghajar could go back to Syria at some point.

At play here is the strategic importance of the border to Israel (which, as you can see above, doesn’t even extend that far up except to touch Ghajar,) and several key water sources in the region.

What’s the end result? A village that was divided into two parts that are now divided by a checkpoint (since an Israeli soldier was kidnapped in the region in 2005, making security harder for Israel to control in the area), and a village that straddles three different countries, essentially, none of which are willing to offer a solution to the citizens there.

The actual village, from here. 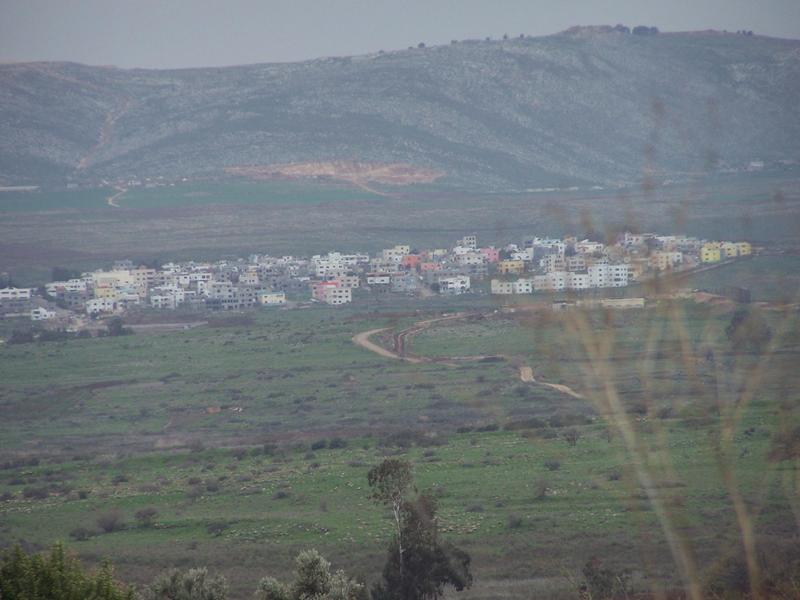 Such are the realities of the Middle East today, and, as is evident, ones caused partially by the British and the UN pretty much partitioning things willy-nilly.  I’d love to see more pictures of daily life in this village, and what is interesting is that Dr. Kaufman said that the villagers live better, relatively compared to the other Arab villages (not Jewish) in the region.