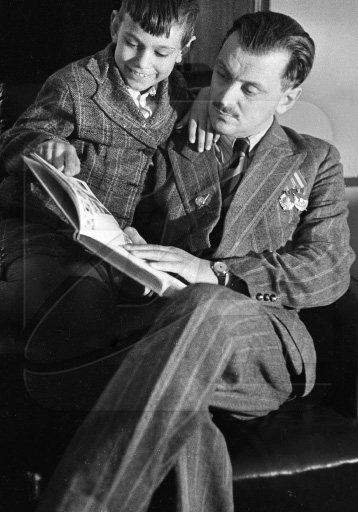 Thanks to Atul Acharya (@atulacharya) for pointing out this link to me in The Economist, about Sergei Mikhalkov.  He then asked for my reaction.  Too bad I had no idea who Sergei Mikhalkov was, although the name sounded familiar.  It turns out that ,

Sergei Mikhalkov, an author favored by Stalin who wrote the lyrics for the Soviet and Russian national anthems, persecuted dissident writers as part of the Soviet propaganda machine and fathered two noted film directors, has died at age 96.

The reason the name sounded familiar to me was that he was the father of famous Soviet/Russian director Nikita Mikhalkov, who is responsible for movies that shaped generations of Russian culture and are unfortunately still shaping mine because my family brings them up every time I see them.

The other reason I remember him is that he is known for the ubiquitous Russian children’s rhyme, Dyadya Stepa, Uncle Stepa (Stephen), which is about an abnormally tall man, approximately the size of Kareem Abdul Jabar.  Except I have no idea how he became so tall in the USSR without any food.

The father Mikhalkov was a key personage in every Soviet administration and even to his death continued to remain on Putin’s viewfinder, as the Economist eulogizes,

Mr Mikhalkov penned the words to two versions of the Soviet national anthem, one glorifying Stalin and one ignoring him. After Russia shrugged off communism he wrote a third version, to the same tune. In between he denounced two of the country’s greatest writers, Boris Pasternak and Alexander Solzhenitsyn. Every regime he served gave him medals. (Vicki’s note: You can see these on his Russian Wikipedia page)

Admittedly, national anthems rarely make great literature, and other Soviet poets, including on one occasion even the great Anna Akhmatova, found it expedient to put their pens at the service of the regime. But Mr Mikhalkov’s loyalty was exceptional. A good example of his work is “I want to go home”, a 1948 propaganda play about post-war orphanages in Germany, in which sinister British officials try to brainwash and kidnap Soviet children to use them as spies and slaves in the imperialist cause. The plot is foiled by heroic and kindly Soviet officers. The truth was exactly the other way round: it was the Soviet secret police who organised ruthless repatriations, often dividing families.

To which I say, it’s amazing.  It’s amazing that a person could have survived the entire Soviet system staying so close to political power.  It again emphasizes for me the enormity of the Evil with a capital E of the Soviet empire and how it could destroy or build up people at will.  It’s amazing how writers’ talents were wasted and bent to the machine, as Bulgakov so aptly demonstrates in Master and Margarita, and as countless other Soviet-era writers only dared to whisper onto the pages of their secret diaries.   The death of him signals the death of a crucial reminder of the Soviet era.

The scariest part is that, of course, he was called again to pen Russia’s current national anthem, which has the same music as the Soviet one.  The more things change, the more they go to hell in a handbasket in ze Mozerland.