Note: This guest post is by Jane Charney, who I had the good luck of meeting on a Russian Jew trip to Israel about four years ago.  She is thoughtful, intelligent, passionate about her Jewish identity and always has something interesting to add to the debate.  Which is why I hesitated to have her guest post.  We wouldn’t want to up the standards of this website. 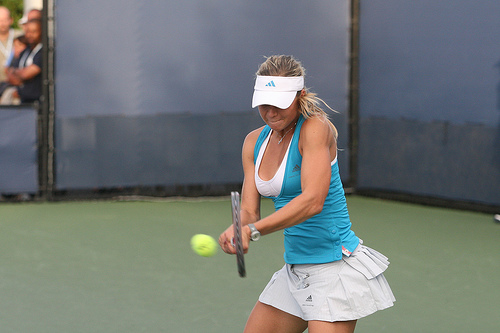 From toga on Flickr.  This is the closest I could get to backhanded. Get it?

A female relative of my husband (thankfully, not my mother-in-law, who is your standard slightly overbearing Russian woman) recently told me that she “never would have thought” I’d be able to “lose all that weight” when they first met me.

For the record, when I first met my now-husband’s family, I was just about 18 and a half and only about 15 pounds heavier than I am now. At 18, I was probably still growing.

The woman who commended me on losing “all that weight” has a knack for giving backhanded compliments. Actually, I don’t believe I’ve ever heard any genuine praise – without the habitual negativity – from her. Perhaps she is simply physically incapable of giving a true compliment.

She is among a cadre of women who love nothing more than to tell you off with a smile on their faces. Sometimes I think they don’t even realize they’re doing this. We all know them – they’re the ones telling you that “the beautiful skirt you chose to wear does wonders for your hips” or that “your best friend is so great and would have all the boys fawning all over her if only she wasn’t a fat cow.” They love to pass judgment on everything regardless of whether they were asked to express their opinion or whether they actually know anything about the subject.

The issue gets me riled up partly because I love compliments, especially giving them – there’s a certain lightness to your soul when you say a nice thing about someone! People like my husband’s relative defy the purpose of a compliment. Instead they deliver the one-two punch, requiring those on the receiving side to learn to duck quickly.

Obviously, I’m above having my self-esteem destroyed by this woman’s disapproval (I’m not that close with the in-laws), but the negativity inherent in her comments makes conversations with her rather unpleasant. I’ve long ago learned to just smile and nod whenever one of her pearls of wisdom find their way into a conversation, which I try to limit to a bare minimum by virtue of having my husband do all the communication with his side of the family. Yeah, I’m devious like that!

In any case, compliments are meant to create a warm fuzzy feeling, not make you want to pry open the floorboards and fall through the newly opened hole just to escape from the barbs (however “well-meaning” the person might be). I challenge each of us to say at least one nice thing to someone: whether it’s expressing appreciation for someone’s outfit or new haircut or it’s letting someone know how funny their latest Facebook status is or how accomplished we think someone is at their career.