Note: I was at a wedding all weekend in Michigan so had no time to write a post today due to recovering from drinking vodka by drinking more vodka. And shooting some video, for you people, to be posted later in the week.    Thankfully, my friend, reliable Starbucks date, and a person whose wit I am frankly intimidated by, Average Jane, also known as @awapy on Twitter saved the day and wrote this awesome post. 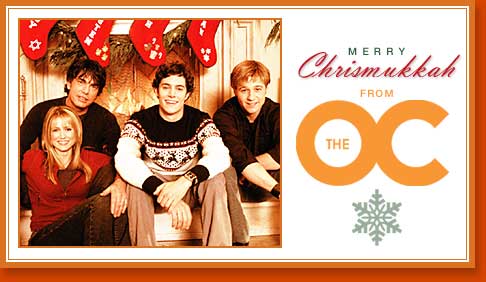 Several Christmases ago, I invited myself along to Midnight Mass with my boyfriend and his parents. Ostensibly, it was because I was being a supportive and caring girlfriend who was keen on showing my Catholic boyfriend that I was open to his parents’ religion. In reality, it was because I was desperately hoping he’d realize that he really loved being Catholic and just couldn’t continue dating me, a Jew.
Yes, I used Jesus as a ploy to get my boyfriend to break up with me. Enormous fail.

His name was Chris. Sometimes, I was actually embarrassed to introduce him to my Jewish friends. If only his name had been Mark or John, names that maybe didn’t evoke the name of his Lord and Savior. I liked him, but as holidays passed and conversations continued it became as apparent as ever that I wanted to marry a Jew, a position that had changed from, “I want Jewish babies,” after a discussion that involved a non-denominational Christmas tree for our non-existent future family.

As a young Jed Bartlett said to his father on the Two Cathedrals episode of West Wing , “It wouldn’t have felt non-denominational if you were Jewish.”  And it didn’t and never would have. To make a point, I did prepare brisket and latkes for Christmas dinner. It was better than the turkey loaf we had for Thanksgiving.

I want to marry a Jew because I want someone who understands. I don’t want to have to ask him to take his ham and cheese sandwich to the porch to eat on Yom Kippur as I’m hungry and don’t need the distraction. Or explain why I’m a little grumpy after shopping in Christmasland at the Mall. I want that part to be easy, because I know the rest of marriage won’t be. And I really hate Christmas music. 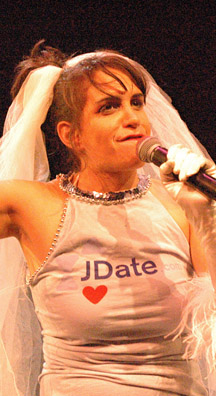 Here’s the rub: If you want to marry a Jew, you have to date a Jew, and shockingly enough, this has become a VERY difficult task. “Well, have you tried JDate?” Shoot me in the face.

Yes, I’ve tried JDate and here’s what I’ve learned: JDate is where awkward but financially stable Jewish men go to find one night stands that they wouldn’t feel bad about taking home to meet their moms. That, or some subset of that. And I’ve seen it over and over again. I think it was CK over at Jewliciouswho said to me that JDate is an enormous Sinkhole of Doom for 95% of the people who use it, and the other 5% get married.

So how else have I tried to meet Jews? Oooooooh just about every way possible. I’ve joined Jewish young professional groups, attended young professional services at a local synagogue, volunteered with Jews, donated blood for Jews…  and nothing. And it’s not like my friends are launching their single Jewish friends in my direction. Actually, what I hear most often is, “It’s so funny! I have all these single Jewish girlfriends, but I don’t know any single men! Ha!”

Ha. Hilarious. But how is that the case? I think what may be going on is that almost all of the single Jewish men who are of substance or quality (and are of marrying age) know they are the hottest commodity in town, and therefore go flitting around with every single Jewess in the DC Metro area. At a Jew-B-Que just yesterday, a friend said to me, “I’m having a great time, but I’ve seen about 10 JDates so far.” I was just shocked he hadn’t seen more since he’d been going out on 2-3 JDates a week for a while there.

When our parents and grandparents were dating, it was easier for find a Jew because culturally, groups were more closely connected. Your Aunt Ida knew a lady Gertrude from shul whose little brother Shlomo had a friend Morty who would be PERFECT for you. And there it was. But now, we go through life meeting people of all religions. We can’t just ask, “Before we get too far, are you Jewish? Because I’m really only on the market for kosher meat.”

And if we date a non-Jew, we run the risk of falling in love. I suppose that’s not the worst ending in the world, but like I said, then things get complicated. But we don’t wear yellow armbands anymore, and we just can’t tell by looking who’s a Jew. Well, not always. We don’t all hang out at the JCC, and I don’t know about you, but I wouldn’t trust my mom or her Aunt Ida to pick out the man of my dreams.

My dear friend Vicki who was gracious enough to invite me to guest post here said, “You gotta find a fixer upper.” Along with my grandmother telling me that I really should just settle for someone, I’m starting to get the hint. I changed my standard of “Tall, Cute, and Jewish” to “Not Awkward and Breathing” so we’ll see how that pans out. In the mean time, wish me luck out there in shark-infested waters of Jewish dating.

And, um, if you know anyone…