Note: While I remain in the Land of Falafel, this is a guest post from my fabulous friend Average Jane, or @awapy on Twitter, who’s bailed me out before. 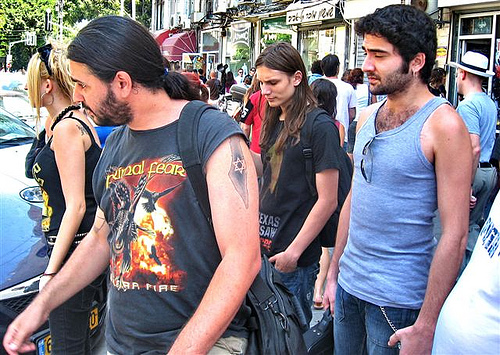 I started working at my campus’ Hillel at 8 – piercing number 8.

I was a good, smart kid, active in Hillel, with a stellar resume, they couldn’t really say “no.” I was working for the regional director (a rabbi) and his Frummie assistant doing fundraising. There were times I would come strolling into work in my oversized, if not slightly tattered, t-shirt and shorts, interrupting her davening with a, “Gooooood morn….! Oh shoot. Sorry!”

But we got along splendidly. She gave me lessons for life. I taught her about alternative culture. She cooked for me for the holidays. I ate the food she cooked for me. About a year after I started, she said to me, “Ya know, I was scared of you when you started working here.” I was shocked! I was, and_,ahem,_ am, one of the nicest people in the world. “At least you’re not tattooed,” she’d say in conclusion.

But what if I were?

There is a raging debate in the Jewish subculture about Jews and Tattoos. Is it against Jewish law? Can you be buried in a Jewish cemetery?  When I was getting my piercings, I thought a lot about the religious implications of body modification. I was at the piercing studio one day talking about that very subject with my favorite piercer (he did piercings 9-12).

“I know I’m not supposed to get pierced – but what’s the difference between getting my earlobes pierced and getting my tongue pierced? And if God wanted you to be buried the way you were born, shouldn’t you ask for your foreskin back?” Well, back then the logic made sense. 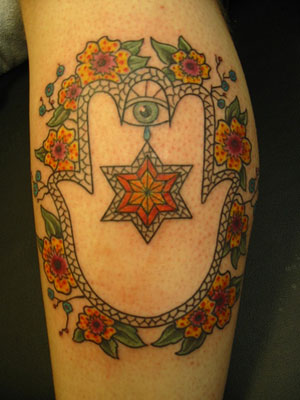 What I find most interesting is that of the Jews I know who are tattooed, most have Jewish tattoos. Perhaps it’s a way to reclaim the tattooing that was inflicted on Jews during the Holocaust. Perhaps it’s a way for Jewish youth to defy their parents in a way that their parents can’t be too upset about: “Look mom – I got a tattoo. But before you get mad, it’s grandpa’s name in Hebrew!” Or maybe it’s the latest way for Jew who feel disenfranchised by organized religion to pronounce their heritage proudly and publicly every day.

I mean, there’s also the part about it just looking awesome. Take a second and search for “Jewish Tattoos” in your search engine of choice. You’ll find beautiful photos. You’ll find Tattoo Jew the movie, and the Jews with Tattoos calendar for charity. Before you judge, look at them objectively. As art. Then think of them as the new Judaica. At least that what I do.

My issue with Jews being against tattoos is the same issue I have with the  Christian Right being against gay marriage: You don’t get to pick and choose which commandments are the most wrong not to follow. I suppose you can, but why? To make yourself feel better about the ones you choose not to follow? “Sure, I eat bacon and work on Shabbat – but that whole tattooing thing is the WORST! As long as I don’t do that, then I’m good, right?”

I took all my piercings out years ago, but not because I wanted to. I had surgery and by the time the drugs wore off enough to safely put them back in my face, the holes had closed. I miss them. If I ever got a job that would allow me to get them all pierced again, I would. Well, most of them. Don’t ask.

And I do want a tattoo. I want one because I think they are beautiful. And yes, I want them to be Jewish. I would love to get inked by Israeli tattoo artist Ami James of Miami Ink fame, but that’s just because I don’t want anyone to screw up the spelling.