It’s rare to find a really good satire that involves flyovers AND Bryan Adams these days. It’s even harder if, before reading that satire, you have no idea what a flyover actually is.  That’s why I was so exited to find Family Planning, the first novel by witty and insightful flyover expert and author Karan Mahajan. 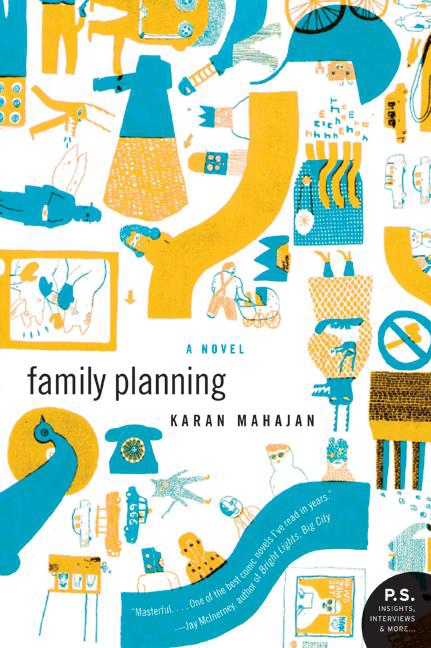 Family Planning is a satire of the Indian bureaucratic political system, large middle-class Indian families, wannabe-rocker teenagers, and soap-opera-watching Indian housewives.  It also tackles love/arranged marriage, adoption, life for NRIs in America.  But it’s not meant specifically for an Indian audience.  Above all, it’s extraordinarily witty (did I mention this?)

The premise of the novel is that the protagonist Arjun Ahuja’s father, Rakesh Ahuja, the Minister of Urban Development, is only attracted to Arjun’s mother when she’s pregnant.  As a result, Arjun has twelve brothers and sisters and another on the way. The novel starts when Arjun walks in on his parents having sex in the nursery, and Rakesh is faced with how to talk to his son.   At the same time, Arjun is in high school and trying to start a rock band to impress a girl he rides on the school bus with, but is thwarted in his attempts because he most unfortunately views Bryan Adams as an idol to aspire to.   Rakesh has issues of his own as he resigns from the government, for the sixty-third time, on account of a conspiracy against the flyovers that he is in charge of planning and implementing.  As a side note, he is part of a political party that puts forward “intolerable bills such as the Diversity of the Motherland Act which calls for the compulsory resignation of all Muslims ‘for reasons of diversity and national security’.”

Rakesh’s wife, Sangita, communicates with the family by watching Indian soap operas, and may or may not be Arjun’s real mother.  All of this comes together in front of  a rich backdrop of New Delhi.  This book was very informative for me because, as you may know, I love Indian culture, but will unfortunately never get to visit New Delhi because I am  cheap.  Additionally, it’s one of the few books where I actually bookmarked pages in my library version (criminal.) because I laughed out loud on several occasions. My favorite is Rakesh’s resignation letter, which is about halfway through the book.  You can read the first couple pages as an excerpt here. 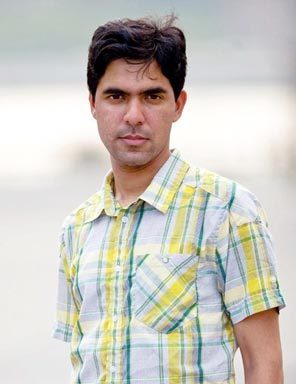 After reading the book, I had the pleasure of interviewing Karan about some of his thoughts that go into writing satire, particularly one aimed at your fellow countrymen, and satire that aims to span cultures:

VB: Did you have to work at developing your wry, fast-paced writing style, or was it something that has come naturally to you?
KM: I don’t believe a writer can work to develop a style, anymore than one can work to develop a personality: people will always see through your striving to the fear or sophistry that’s animating your performance. So I stuck with what felt instinctively right to me, and I hope that’s an instinct that’s been honed by the reading I’ve done–and by the wry and fast-paced life I’ve lived!
VB: Were you afraid that your audience wouldn’t “get it”, or that people of your parents’ generation would be offended by the book? Have you found yourself rewriting passages you thought were funny as a result of how you believe the audience would perceive them?
</div>
KM:I wasn’t really afraid until people started reading the damn thing. When you write comedy, you’re arrogantly assuming the everyone has a sense of humor, when, in fact, the implosive state of the universe suggests otherwise. People everywhere take themselves too seriously. I wanted to illuminate the sadness of that selfishness and pettiness with comedy. I rewrote passages whenever I thought the humor was too easy, or I’d cracked an unfair joke against my characters, but I didn’t fear the fallout of offending people. That’s the least you can do as a writer, so why not?
VB: Similarly, you’ve said that you wrote the book to shed a new light on India without “oriental mysticism,” but were you targeting Western audiences or Indian ones? If for Western audiences, how did you handle the fact that maybe they wouldn’t understand references to cricket, daal, etc?
</div>
KM:I was targeting both audiences, and the easiest way to do that was by being as truthful as you can to the mileu you’re writing about–to not infect it with external perceptions of the place, whether Indian or Western. I wanted to write like an insider, because I knew that intimacy and warmth can be transmitted across cultures.As for the Indian words, you use them when you don’t have a good English substitute or they just sound right, particularly in dialogue.
VB:You skewer the Indian bureaucracy thoroughly in your book.  If you had to pick one aspect of American society to research and mock with the same breadth, what would you pick?
</div>
KM:Race relations, definitely.
VB: If you had to choose between an Alphonso mango and Gulab Jamun, which would it be?
</div>
KM:Alphonso, anyday, especially with vanilla ice-cream. Though, now that you’re asking, this seems like a really, really unfair question.
You can buy the book on Amazon or just get it at the library.  Your copy may have at least fifty earmarked pages.
☰