The pros of Russian husbands

Note: From time to time, I get questions asking me for Russian-related advice, which I am perfectly qualified to give, for a number of reasons that I don’t feel like getting into. You should probably consult your lawyer and primary physician before reading.   I recently got a question from Amy, via Marinka, who is providing her own answer to the situation below on her blog, as well:

Hey listen I need Advice From Marinka. My daughter is moving to New Orleans where her boyfriend and his parents live. (And yes, there’s a s—-load of angsty posts in there for me. Fun.) Here’s where you come in – they are RUSSIAN. He lived in effing Siberia until he was in 1st grade then they came here. His mom is a ballerina – effing kid-you-not. His grandparents are still in Siberia and they own a vodka — um – farm? distillery? factory? (I love vodka.)- and also a potato farm. It’s like I’m being dragged into the fringes of a f—— Tolstoy novel.

What advice do you have for me?

Note: I censor swear words on this blog because there’s just so much f——– vocabulary words you can f——- use without swearwords, that there’s no point to this s—-.  Also, I think my mom reads this blog.  Because she calls me and tells me she reads the blog. 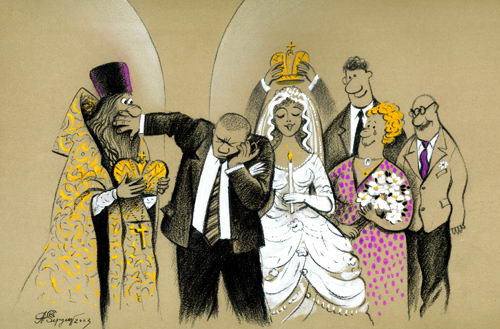 Before I answer, I have to know where your passionate hatred for Russians, aside from the fact that one is stealing your daughter, comes from.  So, please take the easy multiple choice quiz below:

A.  You don’t get the whole caviar thing.  It’s just fish eggs.  How can anyone like them? Delicious  salty fish eggs.  On buttered toast.  With your morning tea. Sounds awful.

B.  You were forced to read Dr. Zhivago in high school and did not understand why the hot doctor was in love with Mentally Decimated Lara

C.  You have something against using vodka as a reasonable medicinal cure for a number of minor and medium-size ailments

D.  You are terrified of Russian men.

If you answered D, I am here to assuage your fears.

As you are comforted by my knowledgeable call to answer your dilemma, you may find yourself asking, “Who the hell are you?”  Let me lay out my credentials for you.  I have been married to a Russian Man for nine months and have been Russian for my entire life (as far as I know.  Mom? Dad?)  Therefore, I am fully qualified to offer you professional lifestyle advice.

Like with any experience, including doing acid and purchasing a medium-size family sedan, being in a relationship with a Russian man has both its pros and cons.

1. Very Moldable: You know how American men are all like, “Oh, I need to be independent, don’t tell me what to do, let me just go to my therapist and figure it out?”  Russian husbands LOVE being told what to do.   That part in My Big Fat Greek Wedding where the mom tells her, the man is the head and the woman is the neck (below)?  Well, Mr. B (that would be the Russian Husband)’s grandma (may she rest in peace) told me the same thing before we got married.  Also, she told me this when Mr. B was in the room.  And he kind of nodded.   I’m like the command central planner in our socialist marriage.  No existential, angsty, role-examining American men here!

2.  Career-Oriented and Responsible: Fact: All Russian men become programmers.  This is required by article four in the Russian constitution.  It’s true, that in their high school phase, they may waver and start pulling shady Eastern European gimmicks such as selling cell phones.  Or real estate.  In fact, one Russian acquaintance sells both cell phones AND real estate.  He was also the DJ at our wedding.  You can call up DJ Oleg if you need a house in the Philly area or are looking to have some great

BanDeROS tunes at your upcoming nuptials. Eventually, though, they straighten out. How does this benefit you?  None of this liberal artsy major bulls—.  Mr. B is a programmer, and he pulls in a solid five figures on an annual basis.  If he were an English major, like some American friends I know, he would be sitting in Caribou Coffee, sipping on his mocha skim light sugar bacon salt latte and pondering what he should Do With Himself In Life.  But because he’s not joining the Peace Corps, I’m rollin’ in our brand-new, tricked-out Honda Civic (which is another thing All Russian Men have.)

3.  Family-Oriented: One of the reasons to marry into a Russian family is because, in addition to your husband, you also get the mother-in-law.  The mother-in-law is awesome, in contrast to American mother-in-laws.  Because now, you have two sources of food:  your mom, and your mother-in-law. And you don’t have to cook ever again!  At least, I don’t have it in my planner until 2010.  Whereas American moms have given me candy and, if I was lucky, pigs in a blanket, my actual mother-in-law brings me watermelons, cakes, loaves of bread, and, on one occasion, a whole chicken.  Russian mothers-in-law, when you marry in, really do consider them your children, maybe even more so than their actual children.  In fact, I don’t know if my mom remembers that I’m her child, because she loves Mr. B so much.  “Are you getting fed over there, “ she asks Mr. B with unfettered concern, every time we go home.  “Yeah,” I tell her, “Mr. B’s mom just brought us another chicken last week.”

On another note, Russian men also love kids.  Mr. B frequently quotes the classic Russian movie, “The Godfatherovsky,” when he says, “No man can be a real man if he doesn’t spend time with his family.”  Mr. B is excited about having kids.  Then he uses his mathematical background to say that he will name his first child Euler.  Or Newton.  And, remembering that he is easily moldable, I say, “Over my dead body.”

Of course, just like with Ecstasy, there are a couple of downers to being with Russian guys.  But I’m not going to address any of them here, because Russian men are awesome and I love being married to mine.  It is possible that I could give you some of the downsides, but you would have to buy it, along with a Nokia i350.

So there you have it.  Don’t worry.  What could possibly go wrong?  If you’re still not comforted, think about the alternate scenario: your daughter living with a bayou boy that has three teeth.  Now that’s moldable.