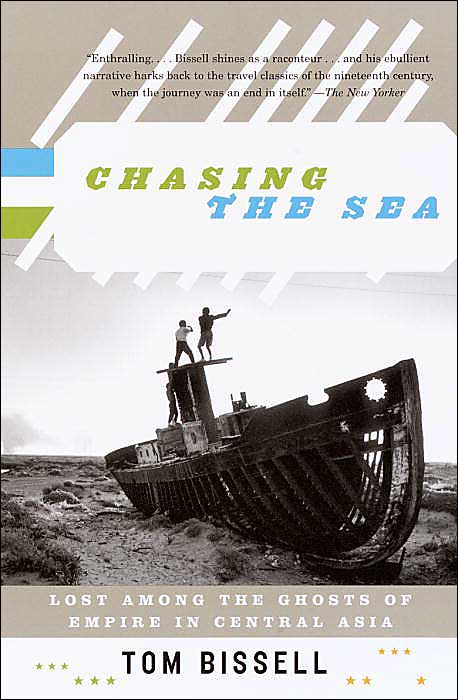 There are writers.  Then there are Writers.  Tom Bissell is a Writer. Lured by an incredible spurt of nobility (or stupidity), he decided to join the Peace Corps in college and was stationed in Uzbekistan.  You know how I always talk trash about Russia?  Uzbekistan makes Russia look like the Rockville Whole Foods by comparison.  Bissell ended up not finishing his stint, hightailing it out of the country after seven months (out of a two-year assignment.)  But then, five years later, he came back  to write Chasing the Sea, a book whose subtitle is Being a Narrative of a Journey Through Uzbekistan, Including Descriptions of LIfe Therein, Culminating with an Arrival at theAral Sea, the World’s Worst Man-Made Ecological Catastrophe, in One Volume.

This pretty much tells you all you need to know about the book.  What I’ll add that it is incredibly rich and layered in its descriptions of Uzbek and post-Soviet culture, infused with history, geography, cultural tidbits, and Uzbek and Russian language trivia that even me, a native Russian speaker of the highest caliber (equivalent to a kindergarten-level fluency in Russian reading), would have never known in a million years.  And Bissell is an extremely, extremely talented writer.  Reading this book has launched him into my top-five authors list, which at the moment, includes Shalom Auslander, Gary Shteyngart, Suzanna Clarke, Philip Pullman, and Charles Dickens. (If you click on the last link, do not pass go, do not collect $200, and go straight back to your 9th grade English class.) (Ok, top 6.  It’s hard to choose.  And count.)

Bissell’s journey starts in Tashkent and sprawls through Bukhara, Gulistan, where he served his term, and Samarkand, before finally winding up at Moynaq, the town that’s the front line for the ecological disaster that is the Aral Sea (depleted to almost 1/4 its original size by Soviet means.) He does this by taking copious, copious notes at every location he visits, recreating everything in such vivid detail that you don’t need to fill out five entry visa forms to Uzbekistan or suffer from a case of The Troubles while eating shashlik.   He is assisted by his trusty translator/local college student/perfect example of homo post-Soveticus, Rustam.

Why?  Aside from the richness of it, I LOVE the tone.  Just love it.  It’s just so cynical, so understanding of the Soviet and Uzbek culture and subtleties, and so deadpan, that every page contains a catchphrase that I bookmarked.  And it’s a library copy. Librarians, have mercy on me.  Here are a few of my favorite passages:

[in the Tashkent metro with Rustam] Rustam stared down at the floor.

-You have some admirers, I whispered.  He looked up.
-Over there. I said.

Rustam found them and smiled.  They all turned simultaneously inward, a giggling huddle.  An old babushka in a yellow hair net and dark blue stockings sitting near the girls pushed her mouth off to the side in an attempt to stifle her smirk.

-Tashkent girls, Rustam said rhapsodically.  Theyr’e the best.  You can talk to the hottest ones.  You can even score with them, dude.  Unless they’re, like, mafiya bitches or something like this.

-I doubt many mafiya women ride the subway though.

[On a flight to the Ferghana Valley]  I turned away from the window and sipped my plastic cup of apple juice.

-I was under the impression that you were served vodka on these local flights.

-Vodka, Rustam asked, Nah who told you this?

-I don’t remember.  I heard it somewhere, from someone.

-The only people who would get vodka would be the pilots.

-Just enough to relax them.

-I’d hate for them to be nervous.

He looked past me out the window, slapping his knees with sudden hambone flair.

-You’re gonna love Ferghana.  It’s like Russia, except prettier.  And I have to say, the people in Ferghana are much cooler than in the rest of the country.

-How do you mean?

-Everyone else in Uzbekistan is desert people.  Desert people are much more, like, stressed out about everything.  In the mountains you can just chill. Nothing is a big deal.  The Kyrgyz are like that.  They’re calm.  They don’t worry.

-But isn’t Tajikistan 80% mountainous?  They didn’t seem to be very willing to chill during their civil war.

Seriously.  Please read this book if you have any shred of decency.  Or if you just like travel books/books about Central Asia.   It starts like this,

The night was hot or cold, depending on where one stood.  It was not unlike swimming in the ocean and feeling across one’s belly an amniotic warmth followed immediately by a freezing underwater gale.

In the meantime, enjoy this song, a tribute to Tashkent, the capital of Uzbekistan, in its native language, Russian, of course.