Before I knew much about Lev Landau, the renowned Russian Jewish Nobel Prize-winning physicist, I would always compare my life to Mr. B with him, because the main facts I knew about Landau were that 1) he was a genius in theoretical physics and math and 2) constantly misplaced his socks. 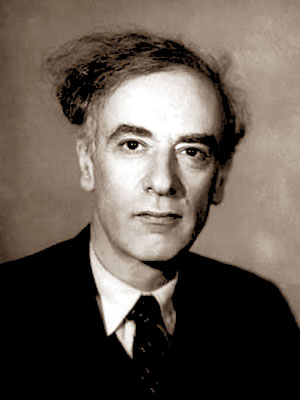 What were the theoretical odds of him picking up ladies with that hair? Turns out, INFINITY TO ONE.

I did not know that Landau also a few electrons short of a balanced atom  and felt constrained by traditional marriage. As a result, he had multiple affairs while his wife, Kora, consented for the duration of their marriage.  After she saw the hair, she lost her will to live, much less divorce him, probably.

Recently, I had the misfortune of watching a poorly-made serial about him.  Russian seriali are much like American TV series except they last for 50 episodes, or until the viewer loses consciousness, whichever comes first.  We were well into Episode One, and after doing a proof on the blackboard, the camera switches to a shot of Landau hitting on some chick at the local pool (with the consent of his fellow professor!) .  The next scene is him proposing to his wife, and the one after that is him going with the pool chick to his dacha while his wife watches in the background.

What a twisted bastard.  As I kept watching, I kept getting angrier and angrier, and not only because the serial was stretching well into part 32.  I didn’t care whether he invented the cure to cancer through superconductivity (which, Mr. B informs me, is his claim to fame).  He was a failure at life.   Yeah, so he was a great physicist and sobrazhal chudak ne slabo, dude was smart, as Russians would say.   But Mr. B is ridiculously smart, too, and I don’t see him hitting up hot coeds because he is tired of monogamy.  Must be the Israeli salad I make him that keeps him complacent.

Which brings me to my most important question:  If he had time to have affairs with over X number of women AND make way in magnetism at a quantum level, why didn’t he have time to brush his hair?  Moreover, did his pioneering research make up for the fact that he somehow got the poles on his magnet reversed, so to speak?

Oh, the questions I have about humanity.  What do you think? Does the fact that he made major contributions to science make it ok that he was openly emotionally manipulating his wife? If she consented, and subsequently suffered, does this make her the bad person uncapable of leaving abuse?   Your thoughts below.