I don’t know about you, but I always love a good story about how the U.S. government screws over its constituents. Turkmeniscam by Ken Silverstein (journalist and fellow Jew) promises such a story and delivers with style. The subtitle, “How Washington Lobbyists Fought to Flack for a Stalinist Dictatorship,” says it all. 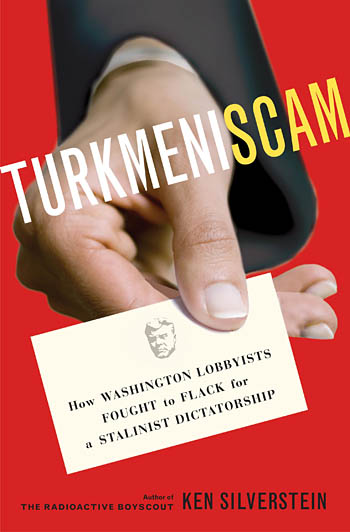 The amount of corruption that Silverstein uncovers in the United States government is alarming.  He starts with the background of the fallout against Jack Abramoff and other lobbyists in the fall of 2006, and goes on to explore the ultrashady relationship between, specifically, international lobbyists willing to shill dictatorships for large amounts of money.

When one flips through the pages of the [U.S. government’s annual survey of global human rights in March 2007], it becomes apparent that many of the countries most severly criticized for human rights abuses had fon from the Bush administration foreign aid, military assistance, adn expanded trade opportunities.  A number of leaders from these countries have also won coveted White House visits, and accompanying photo ops with Bush or other senior officials.

This reaches back much further than the Bush administration, however, and lobbyists and legislators have become inextricably intertwined in government, bonded together by billions of dollars and mutual owed favors.

Silverstein offers several things from his book:  1) An explanation of how lobbying firms work and how they curry favor with the government 2) A history of how such activities come to be and, most fascinating, 3)an expose.  He infiltrates two very prestigious Washington, D.C. international lobbying firms, pretending to be a shadowy proxy company, The Maldon Group, which has geopolitical interests in Turkmenistan, a government renowned for its brutality. His goal is to get the groups to lobby and create favor for positive trade relations between Turkmenistan and the United States, without having the groups ask too many questions.

Some of my favorite descriptions of Turkmenistan by Silverstein, who clearly has done meticulous research in planning this book, are those of its past psycho dictator, Sapurmarat Niyazov:

When he was crowned as President-for-Life, Niyazov was presented with a white robe and a palm staff, traditional symbols of the Prophet Mohammed.  Not long afterward, he declared himself a “national prophet…

To spread his own pearls of personal and spiritual wsdom, Niyazov penned the Ruhnama, which was described on its official website as being “on par with the Bible and the Koran.”  Ruhnama is the veil of the Turkmen people’s face and soul, wrote Niyazov in the first chapter…..September was renamed Ruhnama under the Turkmenbashi, and Saturday was renamed the Day of the Mind, and henceforth was devoted to reading his masterwork.

What’s worse is that, aside from these comic incidents, Niyazov pretty much killed a bunch of people and made his personality cult worse than anything Stalin could have concocted.

Silverstein goes on to say that he would be able to pay $10 million, which gets him not only enormous exposure to Congressmen, who, plied by lobbying firm favors, would be more willing to also promote Turkmenistan, but to think tanks and jorunalists who might promote Turkmenistan in favorable, clearly-biased articles, purchased by money that goes around and around in government.

I’ll ruin the end for you and say that two lobbying firms agreed to represent him in his mission to bring Turkmenistan into a positive light, but the process of going through to research firms and how they prop up rouge governments is what is most important in this book. It’s a book that, like Confessions of an Economic Hitman, really opened my eyes to the way international wheeling and dealing, and the fact that those who lobby for dictatorial regimes justify their actions by saying they are no worse than lawyers who represent clients that may be guilty.