Why we all sometimes need a Roman Holiday

I just finished watching Roman Holiday with Mr. B, who harbors a long-time crush on Audrey Hepburn, cause he’s classy like that.  It’s actually one of the reasons I admire him most.  I like to think that, not being able to marry Audrey, he saw me as the second-best choice. I also like to think that I will lose 5 lbs simply by switching to low-fat ice cream.  I live in delusion-land sometimes.  Come join me, it’s great over here (lots of vanilla and rocky road for all.)

Anyway, so I was completely taken by how charming and simple and elegant the movie was, as was Ms. Hepburn herself, and many movies from that era.   The main premise, for the unenlightened (which included me just a few short hours ago) is that A. is a princess of an unnamed European principality who is on a tour of Euorpe.  She’s already been to a great many countries, and by the time she reaches Italy, the last leg of her tour, she’s exhausted.   She must constantly courtsey and greet royal leaders, wear uncomfortable footwear, and be escorted around wearing big white dresses.  In a way, it’s like my wedding day, only I didn’t get to drink champagne with German dignitaries.  Only complimentary vodka in a container made of ice provided by the Russian restaurant where we had our wedding.  Hey, it was on the house.

By the time her handler reads her her schedule, she is exhausted and starts going into hysterics. She has her life all planned out and the stress of the day waits.  She decides to escape.  And during the 24 hours that she’s gone, she completely lets loose, meeting an American along the way.  She gets to do all these things she never planned on before.  She smokes her first cigarette, eats gelato, and rides a scooter, among other things you can no longer do in Italy because they have probably been subregulated by some government agency.

The day is completely carefree, but at the end, she has to go back to her royal duties.  I think we all need days like that sometimes, where we completely unplug.   I usually check my email at least once after work.  I’m on Twitter every weekend.  But this weekend, I didn’t do any of that.  I just spend time with my family.  Today, particularly, me, Mr. B, and my parents went to ride bikes.  At first I didn’t want to, but I really liked it.  I didn’t have my cell phone or laptop, it was just me and the bike.  Oh, and a bunch of cows on the side of the bike trail.   I call her Caramella. 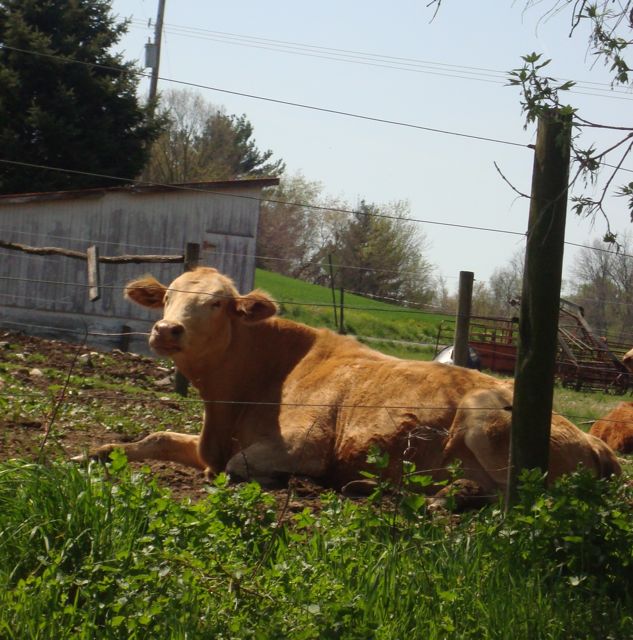 It was quiet, I didn’t have to think about what I was going to blog next, or whether I needed to check my email.  It was just me and my family.  And today, where we spend about 80 bajillion hours of our lives at the computer, that’s especially important.

I think especially in this world of Twitter, Blackberries, constant streaming something or other, Friendfeeds, and 1000+ articles in my Google Reader since I got back, it’s just sometimes important to let loose like Princess Ana and eat a gelato, if only to go back to the grind.  Make mine fat-free.