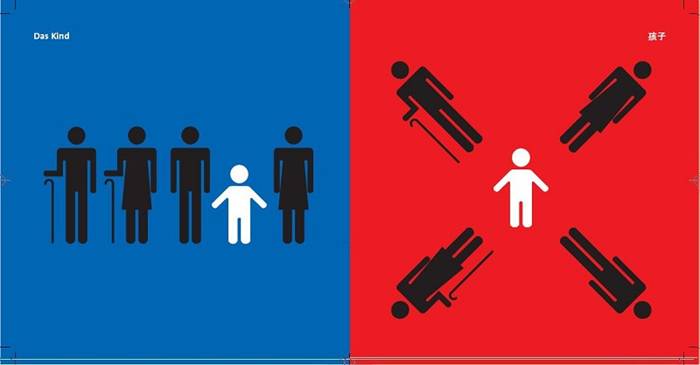 This picture is from a website that has been circulating around and cross-posted in a million places that highlights the difference between German (blue) and Chinese (red) culture without words, and is the most appropriate picture for my post.

Lately, there’s been a lot of debate about motherhood online, particularly with Penelope Trunk’s post where someone criticized her on Twitter because she tweeted the following about staying at home one day with her kids:

No school today and the nanny’s on vacation. A whole day with the kids gets so boring: all intergalactic battles and no intellectual banter.

In response, the other person Tweeted the following:

sorry your kids are a burden, send them to OH, we’ll enjoy them for who they are

In response to that, she went into a rage.  She found out his phone number and called his work and his house, hoping to tell him off.  When she didn’t catch him at either, she wrote a scathing blog post that listed both his full name and where he lives. In a last bit of mercy, she didn’t publish his phone number.  I’m not going to link to the post, because I think it’s horrible what she did.  Her blog has a ridiculously high viewership and she has over 11,000 followers on Twitter, so naturally, he was Googlebombed, his reputation was ruined, and she got tons of hits on the site.  Let me pause for a minute here and say how crazy it was that she was going to publish his phone number, “just to teach him a lesson.”  This diminishes her credibility immediately.

In the blog post, she berated him for judging her as a mother because she wrote that she was bored staying at home with her kids, and that he as a father doesn’t know what mothering is like, etc.  She wrote that parents need to be able to express the fact that parenting isn’t always fun and games, and that at times, there are frustrations and problems.

No one has the right to judge her as a mother, especially not men.  And she admits that she wasn’t meant to be a stay-at-home mother.  But staying at home for ONE day with your kids leads to boredom and not enough intellectual stimulation for you?  So much so, that you have to put them down on Twitter in front of 11,000 random people by relaying that they are playing video games and you are bored?

This was the part that astounded me the most about this post,

And as soon as your mind wanders too far, something bad happens. For example, I took the kids on a hike yesterday, taking a coat for myself but not for them. Because I checked out. Because I wanted to think about things that are more interesting than coats. This is normal behavior. I mean, intellectuals need intellectual stimulation, and that’s not something kids give.

I understand being bored or making mistakes with parenting sometimes.  I understand stay at home moms being stifled creatively because they had to give up their jobs.  I can understand the stress of having to balance work, and kids and husband, and home. Those are all important things that SHOULD be under discussion and that moms have every right to talk about.

But forgetting your kids’ jackets because you wanted to think about things more interesting than coats? While you yourself are wearing a coat?   That’s horrible parenting.   I know.  I’m not a parent.  I have no right to judge.  But here’s what happened to me.

A couple days ago, as  I blogged, Mr. B and I were watching the cherry blossoms with family.  It was his aunt and uncle and cousin, his cousin’s wife, and her family.  Mr. B doesn’t like to wear coats. HATES coats.  He’ll wear shorts in January.  That’s the type of bad-ass man he is.  And pretty much me and everyone in his family is always telling him to wear a coat.  The fable of his non-coat wearing has spread, much like the legend of Maniac McGee.

When we went out to see the cherry blossoms, it was a little nippy outside. And on that particular day, I somehow made him wear a coat.   Mr. B’s aunt, his cousin’s wife’s mom, and his cousin’s wife’s dad (who we haven’t even been related to until his cousin got married)  all stopped and noted that he was wearing his jacket and were happy that he wasn’t cold so they didn’t have to worry.  THAT is the power of Russian Jewish parents.

I really think there is a cultural divide between expectations of parents in America and non-American immigrant parents.  Call me biased, but I know that something like forgetting a jacket would never happen among (sane and normal) Russian parents.  Mostly because it is COLD AS HELL in Russia and we’ve been trained to COVER UP YOUR HEAD all the time, or else you will never have kids.  And mostly, because relationships between children and adults are much different in the Western world and among other people, namely immigrants.  They are exactly like the picture at the top of this post.  Once the child is born, the whole world revolves around the child, because they are a joy to have in the house, a continuation of the family.  And parents sacrifice for their kids like hell.

The biggest sacrifice my parents (and Mr. B’s)  have made was to move to America, for me.  To a country where they didn’t know the language, or anything.  They just knew they had to get us out of Russia, for our sake.  They didn’t want to give up their friends, or way of life, but they sucked it up and did it for our sake.  When I was little and we didn’t have any money, my parents slept in the living room of our one-bedroom apartment and let me have the bedroom, because it was important for a kid to have private space.  When we first came to America and I got chicken pox, my dad walked about a mile in the snow in the winter (no car) to buy me a Barbie doll so that I could have something to play with, just like all the other American kids.

They paid for my college education (minus any scholarships I got and even though I did work 3 jobs in college to make some money), and they paid for part of my wedding (even though Mr. B and I protested and begged them not to).  My parents gave up a lot for me, including late nights staying up when I was sick, and worrying, worrying, worrying.  Which is why it is incomprehensible to me that someone could forget their chidrens’ coat. I hope that when I become a mom, I can always put my child first, too.

Here’s another gem I’ve found about motherhood lately.   I read Jezebel a lot.  I love the site.  It has a lot of strong, opinionated women who are snarky, just like me.  But it also sometimes has a lot of mean-spirited comments, such as this one, on a post about having children: I think this post and others like it represent the essence of the wrong attitude about what is wrong with some womens’ perceptions of motherhood.  This commenter won’t for the life of her give up her pets for kids.  But really, that’s what having children is all about: sacrifice.  I know that when I have kids,  I won’t be able to go out to restaurants or take extravagant trips (like the one I’m hoping to plan for India next year), and will have much less time to myself.

But that’s the tradeoff.  The other side of the coin is that you are raising someone to replace you.   And I saw how important this was just recently.  My grandpa broke his leg a couple of months ago.  For a normal person, this would be a non-issue.  My grandpa is 77 years old, and therefore needs more time to heal.  Immediately, my aunt, who lives 20 minutes away, was over there making sure he was ok.  My mom took a day off work to drive to Philadelphia to spend time with him.  Aside from that, my mom calls him every week and visits twice a month, and my aunt is over there weekly.  Without his children, his life would be empty and he would be a miserable old man.  Instead, he has my aunt and my mom, and now, me and my cousin, and Mr. B, and plenty of other people beside to help him out.  That is the joy of children, the flipside of endless nights being woken up by screaming babies, boring 8-year olds, and flippant teenagers.

I’d like to think that my mom gets some enjoyment out of me, even though I mostly call her to bitch about how Mr. B doesn’t fold the towels the right way or how grapes cost more than $1.99 a lb here in DC. I like to think that I contribute positively to her life, and that, because of me, her life is a little more fulfilled.    (Did I mention I have a huge ego?)  Because of me, she got to experience college, high school, softball games, my wedding, and now has a son-in-law, who she considers her own child. Mr. B’s mom also considers both of us her kids now and our families are enriched just because of this.

So, to all the bitter, angry moms out there, just stop and think.  Stop thinking about yourselves, for a single minute.  I know my parents did, and their lives are better and richer for it, and I hope it’s something I can do as well as a parent in the future.