I have a love/hate relationship with A.B. Yehoshua 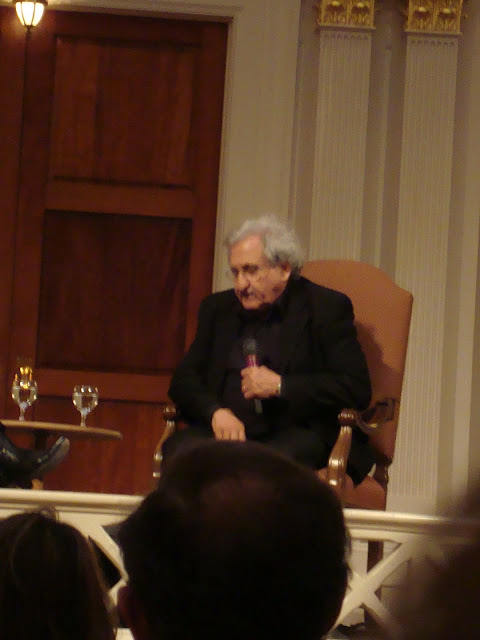 Last night, Mr. B and I went to go see A.B. Yehoshua at Sixth and I.  I can’t believe how much they’ve completely renovated what was a stale building and community somewhere on the outskirts of Chinatown to a vibrant focal meeting point for all kinds of DC Jews and at the caliber of speakers they tend to garner.  I am constantly impressed at the amount of work they do on their brand, especially to engage people in their 20s-30s and how meticulously organized all of their events are.  Having been behind the scenes as a Grinspoon Intern for Hillel, I am amazed at how seamless they make it all look.  Trust me, you don’t ever want to be a Grinspoon Intern.  It’s like looking inside the proverbial Sinclarian pro-Israel sausage factory.

Anyway, the reason I came to know about Yehoshua is because of one of my college Hebrew teachers, Nathan, who always tried to imbue in our class a higher sense of Hebrew literature and culture than just learning alef-bet and eating hummus all day to celebrate “being Israeli.”  So when I saw The Liberated Bride in Ben Gurion, I bought it.

It took me a while to get into the book.  Actually, probably three or four tries.  Because it is ENORMOUS.  When I finally did, I read it all the way through.  Coming from off from an Israel high, I pretty much hated the book.  Why did he write about Palestinians so much? Focus on the Israeli identity!  Write more postively about the soldiers!  Why do you have negative Israeli characters in your book at all!

I even had heated arguments about this with my Hebrew teacher, who had previously made aliyah and served in the army, etc.

“You’ll grow into him,” said Nathan.

“He only writes negative things about Israel,” I said.

It was only after I’d lived a couple months in Israel on my internship that I realized he was right.  Who was I to argue with someone that had had far more experience in Israel than me?  When I lived in Migdal Dizengoff with three other roommates in a 1-bedroom apartment for $1600 a month, I began to understand that Zionism in America often overgeneralizes.

But maybe we need it to.  Because without it, I don’t think anyone would have ever made aliyah.  If someone had told me, “You’ll be sick of falafel, sick of how isolating it can feel here when you don’t know anyone even though everyone is all HAPPY AND JEWISH ALL THE TIME, sick of the rude customer service attitude, and sick of how you can’t get ANYTHING on Shabbat,sick of how when people find out you’re Russian they immediately stereotype against you  ” I definitely would have hesitated.

But now after even a couple months in Israel, I feel that I am starting to grow to Yehoshua a little bit.  Or he is growing on me.  He said the same thing in his conversation last night.  He said that Israeli writers are expected to project the Israeli experience in everything they write.  But sometimes, they just want to write about people, not Israelis or Arabs, just the people experience instead of politics.   Sometimes, they don’t want the burden.

And that’s what we in America have to try hard to do; don’t look at Israelis like Paul Newman from Exodus (which, actually, is an excellent movie.)  When you see Americans, do you think of them all as George Washington+G.W. Bush+Donald Trump?  No, we’re all individual people who don’t always have “American” as the forefront of our conscience.  And neither do Israelis, and that was his point.

He also made another very excellent point, that humor is the most important way to get a point across, something that I highly agree with. It’s strange, given that my impressions if The Liberated Bride was that it wasn’t all that humorous, but stuck in langorous doldrums of identity, divorce, and serious topics. I think this was my favorite part of his discussion, because I really came to understand how he worked as a writer, not what he thought of Israeli politics, which is ultimately what the talk ended up being about.

He said that he considered the family unit, particularly husband and wife, to be of utmost importance, because being married day to day is the most challenging and rewarding thing you can do, which I really respect him for.

I still don’t agree with his very left wing views, or the fact that he should be involved in politics at all.  My thought is that if you are respected in your profession, don’t tarnish it by blasting your political opinion, be it right, left, or Ale Yarok.

Overall, he was a lively and animated writer and personage, but one that, as us writers tend to do , liked to hear himself talk a little too much. I’m glad I got to see him, even though I still love/hate him.