Ever since I heard about this movie on NPR, I couldn’t wait to see it.

The movie, shot in haunting, dark cartoon style , is about the narrator, Ari Folman, and his experiences during and after the Israeli invasion of Lebanon in 1982.

EDIT: Thanks to Matt for pointing out that it was NOT rotoscoping, as I initially thought, but REAL animation, not taken from live shots, which is even more amazing.

It begins as he meets with a friend in a bar who keeps having a recurring dream of exactly 26 dogs chasing him. It turns out that this is a repression of memories of what he did during the war, which was shoot dogs near terrorist’s houses, dogs that were put there on purpose to bark and notify inhabitants of approaching Israeli soldiers. 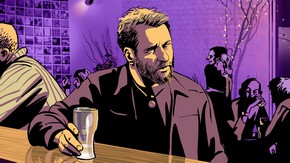 When his friend asks Ari about what he remembers from the war, Ari says he doesn’t remember anything. It’s all blocked out because of the enormity of the trauma. To rediscover what he’s blocked out, he talks to friends that he was with during the war.

As he talks to them, they tell their stories of what happened when they were drafted in ’82 and sent to Lebanon. And through this, he pieces together what happened to him, particularly with regard to his implicit participation or non-participation in the massacre of Palestinian civilians at the Sabra and Shatila refugee camps. 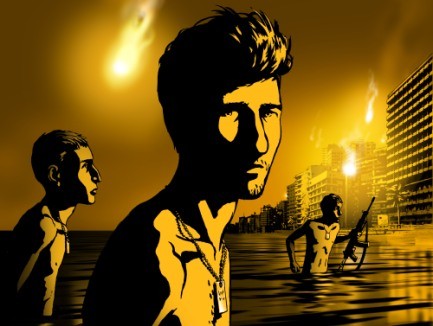 Let me pause here for a minute to discuss what are my personal convictions on this matter.  Obviously, they don’t account for much because I don’t actually live in Israel or have (much to my regret) served in the Israeli army.  So, my opinion is much less valid than those who have.   I think that Israelis going into Lebanon were somewhat justified, but that also it was an attempt at show of bravado for Sharon and Begin, who weren’t used to fighting wars they couldn’t win.

Basically, after Israel won its independence, Palestinians were displaced into Lebanon. Who displaced them?  Was it the Israeli army that was hurriedly trying to create as much of a Jewish state as possible?  Was it Arab forces who called on the Palestinians to leave so that they could purportedly destroy the state of Israel and then all the Palestinian Arabs could go back to their home?  Again, we don’t know.  All of this happened in the fog of war.  The main point is that it happened.

So there were like 100,000 Palestinians living in Southern Lebanon for many, many years. By 1975, there were over 300,000, still living in refugee camps because Lebanon had not granted them citizenship. Was this right?  Again, I don’t know.  I tend to err on the side of, no, it was not right because it created precisely the conditions that gave birth to the PLO and later Hezbollah.

So the PLO started goading Israel in the early 80s. Granted, there was a ceasefire that lasted a year.  In spite of this, some say that Israel looked for a cause to attack, presumably so it could wipe out the terrorist factions in southern Lebanon.  It found this as the PLO attempted assassination of two Israeli diplomats, succeeding once.  Israel invaded Lebanon with the objective of pushing the PLO factions deeper into Lebanon and away from the northern Israeli border.

Did Israel have the right to invade a sovereign country, even to provide stability and security to its citizens, at the risk of destabilizing South Lebanon further? Again, the answer is unclear.   From my point of view it did, but in doing so, it set a very dangerous precedent.

From a Zionist perspective, this was the right thing to do.  From a strictly human perspective in watching this movie, we quickly find that the lines between Zionism and personal fear and expectations are extremely blurred, which I found to be true in my own limited experience of war as well.

It’s all good and well to talk about the Jewish people and national duty to protect and defend Israel on your Ikea couch in suburbia, but the situation looks a little bit different when it is 11:00 at night and you are at your apartment on Dizengoff Street and you are scared shitless because you thought you heard missiles flying by your building when really it was just the garbage truck and all you want to do is get the hell out of the country.

Regarding Sabra and Shatila:I feel relieved that it wasn’t the Israeli army themselves that perpetrated it. But that’s not an excuse at all, obviously.  Just because they patronized the Phalangists doesn’t clear them of any blame.  If it really did happen, there is no excuse that Israeli soldiers were just standing by and watching civilians get killed. The scenes in the movie particularly has a Holocaust-like tinge to it.

In the end, this movie, to me, was not about whether Israel was right or wrong, but that in times of war, people are people, and they will do what people do not as Jews or Arabs, but as a collection of instincts.

A beautiful, haunting shot of Beirut from the movie.  I think Folman’s decision to animate it made it all the more powerful. The soundtrack was also exactly what was needed. 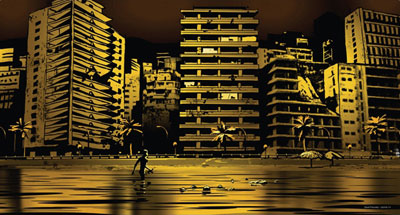 The movie itself was amazing as a work of art.  Dreamlike, dreary, and at times with the morbid kind of humor that all Israelis have after years of being subjected to suicide bombings, it strikes exactly the right tone for a war movie.

You should go see it, and then we can discuss.