Because “Breastaraunt” coming from NPR is a funny word 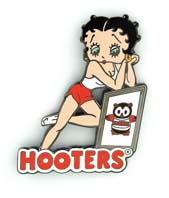 NPR and](http://jezebel.com/5139505/twin-peaks-like-hooters-for-mountain-men) have caught my eye as reporting about a new trend in restaurants:

According to the Atlanta Journal-Constitution, Hooters racked up (ahem) nationwide sales of $997 million last year, a two-percent improvement over 2007. For the sake of comparison, Ruby Tuesday “reported a $37.4 loss in the most recent quarter.”

While everyone knows that Ruby Tuesday’s is HORRIBLE, it seems that, like Wal Mart, other lower middle class places such as Hooter’s are thriving in the economy.  Taking the trend further,  breastaurants (a restaurant employing scantily clad female servers)

The turf is Texas, where Hooters ranks no. 1 nationally among all franchisees. Promising “scenic views,” a company called Twin Peaks recently opened in Bedford, its sixth location in the state, with a roster of buxom, beaming waitresses clad in black-and-red gingham tops tied so snugly they look as if they’re about to pop open.

And Twin Peaks is exactly why I love America.  Where else could you find something as ridiculous?  Obviously, from a feminist viewpoint, this is horrible.  Given, the women who work there aren’t forced into it and maybe in a way are even “empowered” or whatevs, but still.  I was tricked into going to a Hooter’s once.  It was bad.

[NERD EXPLANATION OF THE ECONOMICS OF HOOTERS FOLLOWS]:

However, this can probably be filed under “markets in everything.”  If anything, it illustrates that, given natural free market circumstances, monopolies usually do not exist.  That is, if other businesses see profitability and low enough costs to entry for any given business (be it stripperesque women serving you food joints or automobile factories), they will also jump on the bandwagon for supplying the extra demand, which is evidenced by the glut of profits Hooters has been experiencing recently.  As the supply of these restaurants grows, the market will eventually become saturated to the point where consumers will not want to buy anymore.  Then, the inefficient restaurants will close.

Right now, we are just at the beginning of this cycle, unfortunately, and more and more restaurants will crop up as the economy worsens.  Correlation, or causation?  Or neither and just amusing and freakish at the same time?

And, not the same as this.  Which is just horrendous.